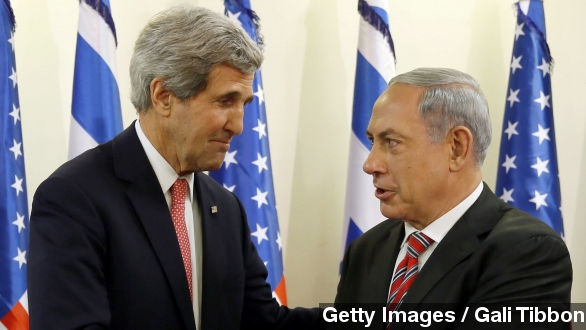 It started when Netanyahu reportedly told supporters it looked like world leaders had given up on preventing Iran from getting nuclear weapons. (Video via Office of Prime Minister Benjamin Netanyahu)

Then on Wednesday, Kerry responded before the House Foreign Affairs Committee. (Video via C-SPAN)

"He may have a judgment that just may not be correct here, and you know, let's wait and see what he says," Kerry said.

That last part refers to an upcoming speech the prime minister will give before both chambers of Congress, on the invitation of House Speaker John Boehner.

Netanyahu has spoken to Congress before, in 2011, when he argued Israel should not return to its pre-1967 borders — another point of disagreement between him and the president. (Video via Office of Prime Minister Benjamin Netanyahu)

But this time, the Obama administration has openly positioned itself against the speech, at least in part because the invitation came from Boehner and the administration didn't learn about it until after the fact.

National Security Advisor Susan Rice told Charlie Rose, "On both sides, there has now been injected a degree of partisanship, which is not only unfortunate, I think it's destructive of the fabric of the relationship."

Netanyahu has opposed the U.S.' recent negotiations with Iran, something he has in common with congressional Republicans, who don't believe Iran will stay true to a disarmament deal. (Video via USA Today)

President Obama has already said he won't be meeting with Netanyahu during the prime minister's visit because the speech on March 3 is only two weeks before Israeli elections and he wants to remain impartial. (Video via The White House)