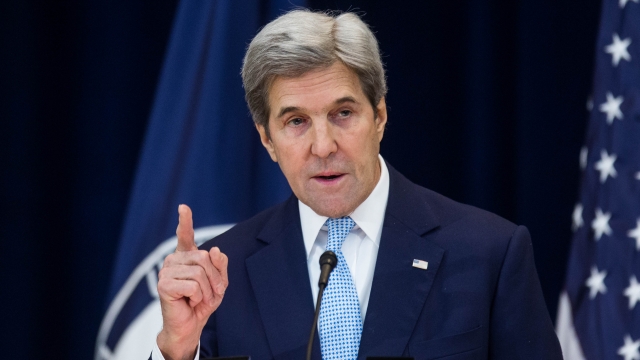 "We cannot properly defend and protect Israel if we allow a viable two-state solution to be destroyed before our own eyes," Secretary of State John Kerry said during a speech Wednesday.

After backlash from Israel, Secretary of State John Kerry said the U.S. is Israel's best friend –– but "friends need to tell each other the hard truths."

One of those hard truths: the Obama administration's goal for Israel and Palestine to find peace in a two-state solution.

Israeli Prime Minister Benjamin Netanyahu has publicly supported a two-state solution to a certain extent. But he's also pushed for Israeli expansion into the West Bank.

Netayahu implied the U.S. was a bad friend when it didn't block a U.N. resolution condemning those Israeli settlements.

"But if more and more settlers are moving into the middle of Palestinian areas, it's going to be just that much harder to separate, that much harder to imagine transferring sovereignty, and that is exactly the outcome that some are purposefully accelerating," Kerry said.

Kerry noted the settlements aren't the only issue in the Israeli-Palestinian conflict, but it's hard for allies on either side to act impartially.

"Too often, anyone who questions Palestinian actions is an apologist for the occupation, and anyone who disagrees with [Israel's] policy is cast as anti-Israel, or even anti-semitic," Kerry said.

While responding to Kerry's comments, Netanyahu said the state of Israel is "deeply grateful" to the United States for "the support Israel has received over many, many decades." But it appears damage has been done.

"Secretary Kerry paid lip service to the unremitting campaign of terrorism that has been waged by the Palestinians against the Jewish state for nearly a century, " Netanyahu said. "... Israelis do not need to be lectured about the importance of peace by foreign leaders. Israel's hand has been extended in peace to its neighbors from day one."

Netanyahu said he has "no doubt" the alliance between the U.S. and Israel "will become even stronger in the future."

And as he alluded to in a tweet earlier in the day, Netanyahu added, "Israel looks forward to working with President-elect Trump and with the America Congress and Democrats and Republicans alike to mitigate the damage that this resolution has done and ultimately to repeal it. Israel hopes that the outgoing Obama administration will prevent any more damage being done to Israel at the U.N. in its waning days."