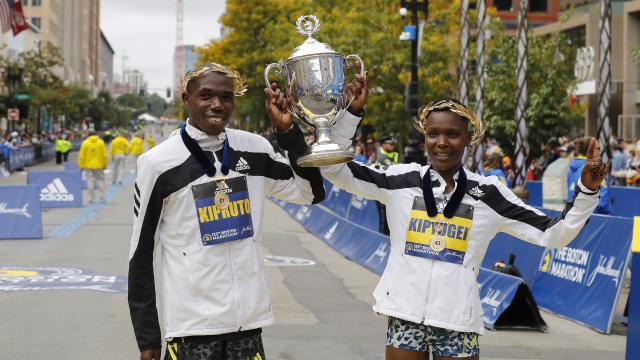 With fall foliage replacing the blooming daffodils and mylar blankets sharing space with masks, the pandemic-delayed Boston Marathon returned Monday after a 30-month absence for a smaller, socially distanced race that ended in a very familiar way.

Benson Kipruto and Diana Kipyogei completed a Kenyan sweep — the eighth since 2000 at the world's oldest and most prestigious 26.2-miler, which moved from its traditional spring date for the first time in its 125-year history because of the coronavirus outbreak.

"We were injured, wounded. Now is the comeback story," said 2014 winner Meb Keflezighi, one of the past champions sharing grand marshal duties with hospital employees who worked through the pandemic. "Hopefully this is an example that post-pandemic, life is getting back to normal."

Although organizers put runners through COVID-19 protocols and asked spectators to keep their distance, there were still sizable crowds in spots from Hopkinton to Boston after an early drizzle cleared and temperatures rose into the 60s.

Participants in the field of 18,000 — down from more than 30,000 in pre-pandemic days — needed to test negative for the coronavirus or prove they were vaccinated before picking up their bib numbers. Masks were required indoors in Boston and on the buses out to the start; they also were handed out along with the finishers' medals and fruit on Boylston Street.

The race also began earlier and with a rolling send-off to avoid the usual crowding in the starting corrals and on the course. None of the changes proved a problem for the Kenyans.

"There's not a lot different on the course," Kipruto said.

A winner in Prague and Athens who finished 10th in Boston in 2019, Kipruto broke away from the lead pack as it turned onto Beacon Street with about 3 miles to go and broke the tape in 2 hours, 9 minutes, 51 seconds. Lemi Berhanu, who won the race in 2016, was second, 46 seconds back; Colin Bennie of Princeton, Massachusetts, was the top American, in seventh.

Kipyogei claimed the women's title, a gilded olive wreath and the $150,000 first prize, finishing in 2:24:45 in her major marathon debut. Edna Kipligat, the 2017 winner, was second, 23 seconds behind.