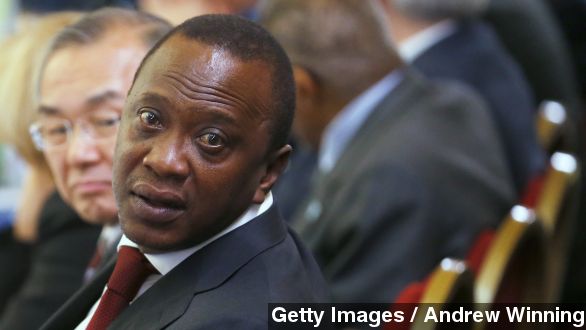 Although Kenya’s president is now free of charges made by the International Criminal Court, the controversial leader may be in for an entirely new set of problems.

The ethnic violence left more than 1,000 dead after gangs loyal to the leading candidates clashed throughout the country. Kenyatta was accused of aiding the militants on behalf of the winning candidate Mwai Kibaki. (Video via CCTV)

Chief prosecutor Fatou Bensouda’s decision to drop the case comes after ICC judges rejected her request for adjournment on Wednesday and gave her one week to either drop it or go forward with the evidence she had. (Video via The Stanley Foundation)

After having postponed the case five times, Bensouda blamed the Kenyan government and its uncooperative behavior in sharing information, false media reports and witness intimidation for her inability to go forward with the case.

Seen in a BBC video, she said, “several people who may have provided important evidence regarding Mr. Kenyatta’s actions have died while others were too terrified to testify for the prosecution.”

Kenyatta, on the other hand, seemed to be in high spirits.

Speaking during K24TV footage, Kenyatta said, “as they say, one down two to go and we’re nearly there. ... So let me not chokesha (Swahili for “tire someone”) you too much, I’m very keen to run home to my wife right now.”

The Kenyan president condemned the ICC for rushing the case and said his "conscience is absolutely clear."

A human rights director told The Wall Street Journal the outcome of this case “is a serious blow to the International Criminal Court and international justice, where gathering evidence against political leaders protected by their state remains an enormous challenge.”

Although Bensouda said a return to the case isn’t outside the realm of possibility, for now it looks like Kenyatta is off the hook. And that might cause a flare up in ethnic tensions.

While Kenyatta and Ruto, who are of different ethnicities, were on opposite sides of the 2007 conflict, they united to win the 2013 elections together. (Video via Capital FM Kenya)

But with Kenyatta clear of charges, an IHS Country Risk analyst for Africa tells Businessweek Ruto’s supporters may perceive it as discrimination against their figurehead and start trouble.

Ruto was charged with crimes against humanity by the ICC in 2013 and the case is currently ongoing. Supporters have called for his case to be dropped on the basis that the evidence is fabricated.

This video includes images from Getty Images, the World Trade Organization and the World Economic Forum.