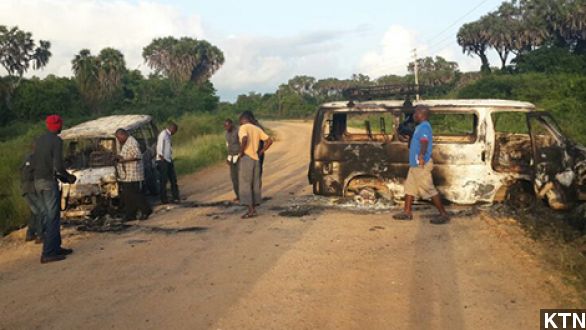 By Elizabeth Hagedorn
June 16, 2014
While there has been no immediate claim of responsibility for Sunday's deadly attack, all signs point to Al-Qaeda-linked militant group al-Shabab.
SHOW TRANSCRIPT

​Nearly 50 World Cup fans in Kenya were shot to death while watching a game Sunday night.

Witnesses in the coastal town of Mpeketoni say some 50 heavily-armed gunmen arrived in hijacked minivans around 8 p.m. local time. They indiscriminately shot at several buildings in town — raiding a police station and setting two hotels ablaze. According to some reports, the gunmen pulled the women aside and ordered them to watch as they shot the men.  (Via Euronews, Al Jazeera, KTN)

Fierce fighting between the gunmen and Kenya’s security forces lasted from Sunday evening into the early hours of Monday morning. (Via K24)

A Kenyan newspaper said the scene resembled a ghost town Monday morning, with many residents still missing and police still combing the wreckage for bodies. (Via Standard Digital)

While no group has claimed responsibility for the attack, the suspicion immediately fell on al-Shabab.

That’s the Somalia-based Islamist extremist group with ties to Al-Qaeda. Its militants have vowed to carry out attacks in retaliation for Kenya’s military presence in Somalia. (Via Channel 4)

And in 2010, al-Shabab admitted to targeting a World Cup viewing party with twin bombings, killing 74 people.

On Twitter, Kenya's National Disaster Operation Centre said it suspected al-Shabab of being behind the Mpeketoni attack.

Mpeketoni is about 30 miles away from the popular tourist destination of Lamu Island. The Kenyan Red Cross has put the death toll at 48, but says that number is expected to rise.