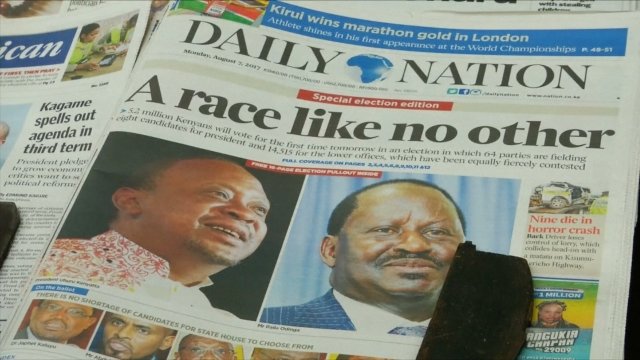 SMS
Violent Incidents Cast A Dark Cloud Over Kenya's Upcoming Election
By Ethan Weston
By Ethan Weston
August 7, 2017
What was expected to be an easy win for Kenya's president has been complicated by violence and a very bad drought.
SHOW TRANSCRIPT

On Tuesday, Kenyans will go to the polls to elect their next president. But a number of incidents have tensions running high before voting even begins.

Current President Uhuru Kenyatta is expected to win, but the election might be closer than most people expected.

That's in part due to a bad drought that has been ongoing since late 2016.

Opposition leader Raila Odinga has used the drought to his advantage, tapping into public anger over government corruption and a failure by Kenyatta to mitigate the effects of the drought.

Kenya is a poor country. Nearly half of its population lives in poverty, and the drought has had huge impacts on food security. The costs of staple foods like maize flour, milk and sugar have risen by double-digit percentages.

And that anger and fear has manifested itself as violence in certain parts of the country. An estimated 20 people have died due to violence between nomadic herders and white settlers.

The drought has forced the herders farther afield to look for grazing land, which in turn has brought to the surface long-held resentment those herders had for white minority property owners who held large swaths of land.

There have been a number of other incidents ahead of the election that have some worried about possible violence, including an 18-hour siege at the vice president's country estate.

A senior election official was also found dead in a forest outside Kenya's capital of Nairobi. Officials say it's possible he was tortured before being killed.

And opposition leader Odinga has already raised concerns of election rigging. The military confirmed the existence of a document Odinga says proves the army plans to help Kenyatta win.

Post-election violence is a real possibility for Kenya. While the country's last election was peaceful, the 2007 one wasn't.

Political and ethnic tensions exploded into bloodshed after Odinga — who lost to then-President Mwai Kibaki — claimed the election was rigged.

Over 1,000 people were killed, and about 600,000 fled their homes because of the violence. It was only after former United Nations Secretary-General Kofi Annan negotiated a power-sharing agreement in 2008 that violence ceased.

While the recent events are worrying, many Kenyans are optimistic about the vote. They expect changing demographics and new technology to help keep the vote fair and peaceful.

On Monday, former U.S. President Barack Obama — whose father was from Kenya — urged Kenyans to work toward a "peaceful and credible" election and said all disputes should be resolved peacefully. The Carter Center is also conducting an observer mission around the election to provide outside oversight and ensure more people trust the results.