Kenya Backs Down From Refugee Camp Closure, For Now 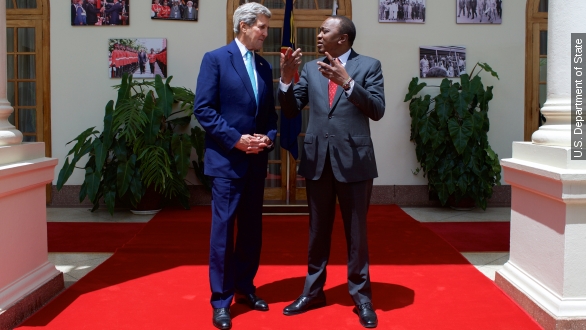 SMS
Kenya Backs Down From Refugee Camp Closure, For Now
By Kate Grumke
By Kate Grumke
May 7, 2015
Last month Kenya announced it was closing the largest refugee camp in the world, but now it's taking that back amid pressure from the U.S. and UN.
SHOW TRANSCRIPT

The world's largest refugee camp is staying open — for now.

On Wednesday Kenya's president backed down from a threat to close the largest refugee camp in the world, under pressure from the U.S. and the UN, as Secretary of State John Kerry visited the country. (Video via State House)

This week, the U.S. State Department announced it's giving $45 million in additional support to the UN's refugee operations in Kenya. A senior State Department official told reporters, "The refugee element of this trip for the Secretary is to ... urge [the government of Kenya] to continue to uphold those international obligations, particularly in the light of some public threats that have been made to close the Dadaab refugee camp and send Somalis back to Somalia."

But when the Kenyan government announced it would close the camp last month, it wasn't the first time. And even with today's announcement that no refugees will be forced to return home, this doesn't mean Kenyan leaders won't continue to push for its closure.

The camp in question is named Dadaab and is in the east of Kenya, near the border of Somalia, where most of the about 350,000 refugees are from.

The estimated 400,000 Somali refugees in all of Kenya are fleeing the crisis and ongoing violence in Somalia. The Dadaab camp has been open for more than 20 years and was originally built for 90,000 people. The U.N. refugee agency reports thousands of the refugees were born in Dadaab.

This time, the Kenyan government's calls to close the camp came after Somalia-based al-Shabaab militant groups claimed responsibility for an attack on Garissa University that killed more than 140 students. Kenyan anti-al-Shabaab sentiment was directed instead at Somali refugees.

After the Garissa attack, Kenya's Deputy President told the UN if it didn't shut down the camp, Kenya would.

There were similar calls for a closing of refugee camps after the 2013 al-Shabaab attack on the Westgate shopping mall in Nairobi. One of the attackers once lived in a different refugee camp in Kenya.

The Kenyan government, the Somali government and the UN officially signed a deal to voluntarily repatriate Somali refugees in November of 2013, but the UN camps remain open to this day.

On Wednesday, John Kerry became the first chief U.S. Diplomat to visit Somalia, although he didn't leave the airport because of security concerns.

"My brief visit confirmed what our diplomats have been telling me: That Somalis are resilient and determined to reclaim your country and your future from the terrorists and militia groups that have been attempting to steal it," said Kerry in a video message to Somali people.