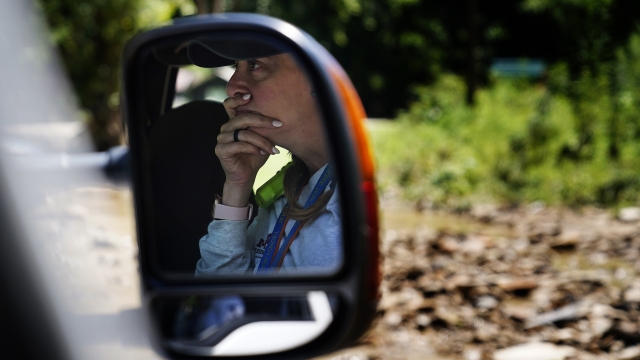 Floods have ravaged parts of Eastern Kentucky, leaving 37 residents dead. Gov. Andy Beshear expects that death toll to rise as recovery efforts continue. However, there have been some 1,300 rescue missions so far and more are in progress. Lt. Gov. Jacqueline Coleman spoke with Newsy's "Morning Rush" to discuss the disasters that have hit the state and how the state can cope in the future as climate change could bring more and more trouble.

NEWSY'S ALEX LIVINGSTON: Thank you so much for joining us today. It's such a pleasure to have you on. But what is the latest on the situation in Eastern Kentucky that you can tell us?

LT. GOV. JACQUELINE COLEMAN: Well, thank you so much for having me and thank you for bringing attention to such a terrible tragedy going on in the eastern part of our state right now. As of this morning, we still have 37 confirmed deaths in Kentucky so far. As the governor says every time he is able to talk to Kentuckians, we expect that number to continue to rise as the waters recede. We are still in search-and-rescue mode. We have the National Guard, we have support coming in from West Virginia, Ohio, Tennessee and our National Guard, our K.S.P.  and our Fish and Wildlife professionals have conducted 1,300 rescue missions so far and they are still going.

NEWSY'S JAY STRUBBERG: How many people are still missing right now? What are the biggest challenges you guys are facing as far as rescuing them?

COLEMAN: One of the biggest challenges that we're facing right now has to do with communication.  As you can imagine, all communication in certain areas that kind of had spotty connectivity to begin with has been a real struggle. And so we are working on getting all of those communications back up and running. We're down to the hardest areas to service at this point. But as the communication comes back, we're able to connect more families together and account for more folks. But right now, we suspect there are hundreds that are still missing and unaccounted for.

LIVINGSTON: Is the geography of the eastern part of the state also posing any difficulty? I know that we had our meteorologist there and he was talking to some people who lived in hollers and I know from working in West Virginia and experiencing that, they could be in some rugged terrain and hard-to-get-to areas. Is that at all a factor in the rescue efforts?

COLEMAN: It absolutely is. I was in several of the hardest-hit counties just yesterday. I was in Letcher County, Knott County, Leslie and Clay County areas all day yesterday and what I kept hearing was the terrain was making it really difficult to get to people. But I will say this: You see stories of folks that are delivering meals and delivering much-needed supplies on ATVs and on horseback because the roads are out, bridges are out. I spoke to a couple of the county judges yesterday. I think Letcher County said there were about 16 bridges that they knew were out so far. In Knott County, it was 60 as in 6-0. Those are public and county bridges. That is not counting all of the private drives and culverts that people used to get from their home to the main roads and so that work is going to continue. We're, again, right now, still recounting to see what the damage actually is. The extent of the damage is overwhelming. I can see it on the faces of Eastern Kentuckians and our locally elected officials, our Kentucky emergency management folks who are working around the clock to save people's lives and to make sure that people have what they need. The tragedy is heartbreaking, but what we are seeing out of our fellow Kentuckians is heartwarming and it renews my faith in humanity to see how wonderful these people are, who have lost everything. They're showing up for their neighbors and lending a hand. I walked into Letcher County High School yesterday and I got cold chills and tears in my eyes looking at the number of students and community members; people from two hours away that have driven in to help supply folks with what they needed. It's remarkable. It gives me hope that that we're in for the long haul.

STRUBBERG: Yeah, it is a silver lining of tragedies like these, how good they are at bringing communities together and [seeing people] helping each other out. It's good to see that. Obviously, the immediate concern is the safety of residents, rescuing missing residents, also the recovery efforts as well. From a long-term perspective, these extreme weather events — whether it is flooding in Kentucky or the heat waves that we're seeing along the West Coast with the wildfires — they're becoming more extreme, they're happening more often and we always hear the words climate change being brought up. What is your state doing to prepare for the impacts of the climate crisis?

COLEMAN: Well, I have to say that first of all, like I said, we are still in the search-and-rescue mission phase of this and so that is where focus is right now. But I can tell you that before we were hit with this tragedy, one of the things that the governor has committed to is building the economy of the future. And he has done that, by landing two of the largest economic development deals in Kentucky's history to become the home of the twin electric vehicle battery plants for Ford. We're going to be the future of the electric vehicle batteries that Ford bet on. In Bowling Green, AESC Envision is doing the same thing. That's the western part of the state. In the eastern part of the state, we are working to make sure that Kentucky is the agri-tech center of the United States with more efficient and effective farming and agriculture practices that conserve water and do all of the things to help feed a growing nation and to do it effectively and efficiently. And so again, this is a long-term plan. It's something that we started as part of our economic development package as soon as we took office. But we've been hit by the tornadoes in the west and now the flooding in the east. We continue to work through that, but certainly, we have made that a centerpiece of our economic development moving forward.

STRUBBERG: Kentucky Lt. Gov. Jacqueline Coleman, thank you so much for your time. Obviously, some devastating developments out of your state. We appreciate you coming on the show.

COLEMAN: Thank you. Thank you so much.