Kentucky Gov.'s Voting Rights Order Could Exclude Up To 170,000 Felons 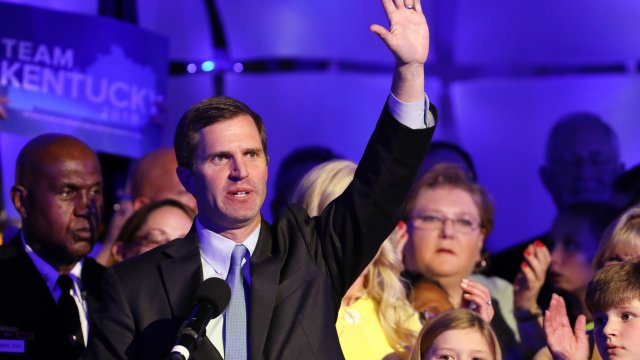 SMS
Kentucky Gov.'s Voting Rights Order Could Exclude Up To 170,000 Felons
By Jamal Andress
By Jamal Andress
December 13, 2019
Gov. Beshear has said in the past "some crimes are so awful" that voting rights shouldn't be restored to those individuals.
SHOW TRANSCRIPT

Kentucky has been one of only two states that barred residents from voting for the rest of their lives because of a felony conviction. Iowa still has a lifetime voting ban for ex-felons.

But a significant portion of Kentucky's population will still not be allowed to vote. Roughly 312,000 citizens have felony convictions — but if preliminary estimates are true, more than half of them will still not be able to vote after Beshear's order. That's because the order excludes certain felonies the state classifies as violent.

Gov. Beshear has said in the past "some crimes are so awful" that voting rights shouldn't be restored to those individuals. And while many activists in the area applaud Beshear's action, they don't believe this distinction between violent and nonviolent crimes is necessary.

"That's what usually comes out is this restoration for nonviolent offenders, because I think politically that's what people think is appropriate …  As long as they've done their time, they should get their rights back, so ... It's not exactly what we want but it's a hell of a lot better than what we've seen before."

Debbie Graner was convicted of arson in 2012 after setting fire to her apartment while heavily intoxicated. Graner struggled with alcoholism for several years before her conviction.

"I'm all about all the people. Some people get their rights to vote back, that's awesome. You know, then the work that we've done is not in vain."

Since she finished her parole in 2017, Graner has been fighting against felony disenfranchisement.

"First of all, it's embarrassing. And it's disheartening. You know, I felt awful when I found out that I couldn't exercise a constitutional right. Pretty much felt like I was an ostrich with my head in the sand. Why should I even care? Because, you know, I was not allowed to even express my voice by voting."