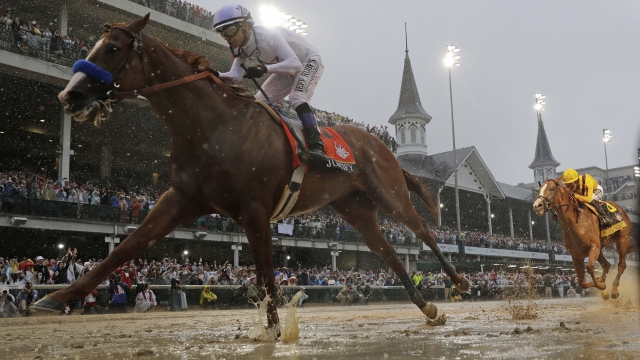 SMS
Kentucky Derby To Be Pushed Back From May To September
By Peter Hecht
By Peter Hecht
March 17, 2020
The famed horse race has been run at Churchill Downs on the first Saturday in May for 74 consecutive years. The last delay was due to World War II.
SHOW TRANSCRIPT

Horse racing's most most famous event — the Kentucky Derby — is being pushed back until September due to the coronavirus.

The 145-year-old Kentucky Derby has been run at Churchill Downs on the first Saturday in May for 74 consecutive years. The last time it was delayed was in 1945 during a ban on horse racing due to World War II.

The Louisville Courier-Journal reported that pushing back the Derby from May 2 to Sept. 5 will also likely impact the other two featured events in horse racing's Triple Crown. It reported that mid-May's Preakness Stakes in Baltimore may also be pushed back to September and that June's Belmont Stakes in New York could be staged in October.

Churchill Downs CEO Bill Carstanjen told the newspaper that "we reached the difficult decision that we needed to reschedule" due to the ongoing pandemic. He said: "At no point did we ever consider canceling the Kentucky Derby."