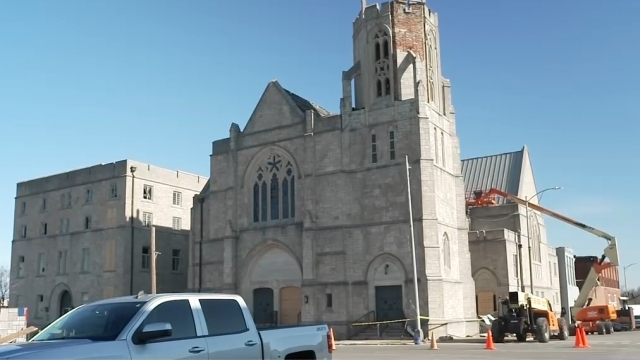 SMS
Kentucky Church Pushes Forward After Tornado
By Tammy Estwick
By Tammy Estwick
December 14, 2021
One of the few churches to remain standing in hard-hit Mayfield, Kentucky, is trying to help others not as fortunate.

One of the few churches still standing in hard hit Mayfield, Kentucky is trying to move forward after one of the worst tornado events in the state's history.

First Baptist Mayfield was Pastor Wes Fowler's childhood church, and now he's been in his position for over a decade, through good and bad times - and now through the unimaginable.

Fowler was at the church during the storm, leaning over families to protect them from falling debris in the basement.

"Kids were, of course, emotional and not doing too well," Fowler said. "But I got my family up against the wall, and Cody, my youth pastor, got his family against the wall and we basically laid on top... basically on top to protect them."

The church is now one of the few still running after a tornado sliced through the heart of downtown Mayfield, with the congregation now refocusing on providing help for those in need of items like water, food, generators, blankets and space heaters.

Many in the congregation are still displaced though. Lorraine Smith came out to grab a supplies for her cousin.

"I found my cousin, and she needs a generator and people just were gracious enough to get her generator," Smith said.

Pastor Fowler says he does have plans to hold service, just somewhere else. While there is still a lot to be done, he says they will push past it.

"This building does mean a lot to me, but still, this is temporary," Fowler said. "I mean, this is just brick and then concrete and plaster. This is temporary. Our faith is in Christ, and that's eternal."