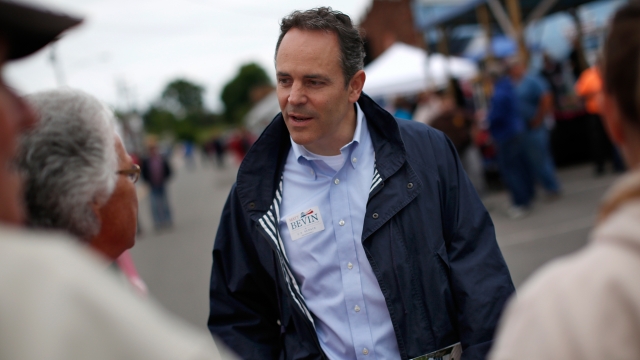 SMS
Kentucky Attorney General Asks FBI To Probe Ex-Governor's Pardons
By Ahmed Jawadi
By Ahmed Jawadi
January 3, 2020
​Among others, Matt Bevin reportedly pardoned the brother of a man who ran a political fundraiser for him in 2018.
SHOW TRANSCRIPT

Kentucky's new attorney general has asked the FBI to look into the pardons made by former Kentucky Gov. Matt Bevin during his last weeks in office.

Attorney General Daniel Cameron wrote in a letter Monday he'd formally asked the FBI to investigate the pardons after discussing the matter with law enforcement. He said: "While Kentucky's Constitution gives the governor the power to pardon a person convicted of a crime, I believe the pardon power should be used sparingly and only after great deliberation with due concern for public safety."

Bevin received widespread backlash for issuing hundreds of pardons and commutations after losing his reelection bid in November. According to The Louisville Courier-Journal, among those pardoned was a man convicted of homicide and other crimes whose brother ran a political fundraiser for Bevin in 2018.

State Rep. Chris Harris and state Senate Minority Leader Morgan McGarvey thanked Cameron in a joint statement, saying, "A governor may have broad pardoning powers, but there must be further scrutiny by law enforcement when there is an appearance of impropriety or corruption."

Bevin defended his actions in a series of tweets last month, saying there was "not one person" he pardoned whom he "would not welcome as a co-worker, neighbor, or to sit beside [him] or any member of [his] family in a church pew or at a public event."