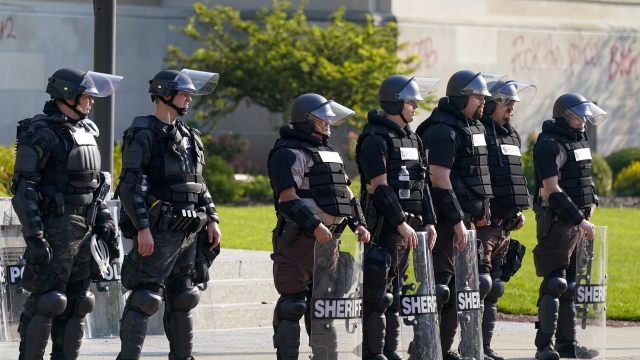 The fallout continues in Kenosha, Wisconsin following the shooting of a 29-year-old Black man by local police. The state’s governor has denounced the shooting, but the local police union is firing back saying he is being irresponsible and doesn't know all the facts.

Police say they were responding to a domestic incident when the shooting occurred.

In a video posted on social media, a man identified by Wisconsin Gov. Tony Evers as Jacob Blake, can be seen walking toward a car as three officers point guns and shout at him.

Police had responded to a call of a fight Blake was reportedly trying to break up. The Kenosha News quoted a witness saying that police tased Blake but he kept walking towards a car. As Blake opens the car door, an officer grabs his shirt from behind and fires into the vehicle. Seven shots can be heard on the video, but it's unclear if more than one officer fired.

Blake's fiancée, Laquisha Booker says a few of their children were in the car.

"You overused it. You shot him numerous times for no reason. It didn't take all that disregard that my kids was in the car at all and you knew they was in there before you made it all to the other side to get him in the car. I been yelling that the whole time let me get my kids," Booker said.

Police say Blake was transported via Flight for Life to a Milwaukee hospital in serious condition.

The incident prompted hundreds of protesters to gather at the scene overnight, as well as outside the Kenosha Police Department and the county courthouse. Multiple fires were recorded throughout the area. At one point, police used tear gas to disperse demonstrators, as the county issued an emergency curfew.

Wisconsin Attorney General Josh Kaul says the officers involved in the incident have been placed on administrative leave. Meanwhile, the Wisconsin Division of Criminal Investigation is working to provide a report of the incident to the prosecutor within 30 days. The prosecutor will then decide what charges, if any, are appropriate.

Governor of Wisconsin Tony Evers condemned the shooting on Twitter: "While we do not have all of the details yet, what we know for certain is that he is not the first Black man or person to have been shot or injured or mercilessly killed at the hands of individuals in law enforcement in our state or our country."

Evers says he is calling state lawmakers into a special session to take action on a package of police reform bills announced earlier this year.

"We must begin the long but important path towards ensuring our state and our country starts starts to live up to our promises of equity and justice," Evers said.

NAACP President and CEO Derrick Johnson says the shooting is another example of why change is needed in police departments across the country.

"It's unfortunate that we continue to see this same type of incident play itself out. We have far too many law enforcement officers, when it comes to African Americans, they lead with shoot to kill as opposed to de-escalate. We must have national policy to address qualified immunity. So police officers are being held accountable. And also a database that’s kept to highlight whether or not law enforcement officers have engaged in past practices that has caused harm," Johnson said.