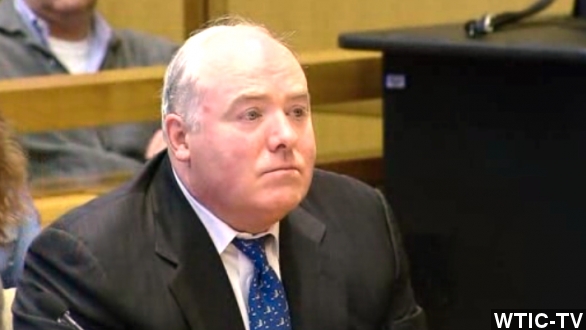 After serving 11 years for the 1975 murder of a 15-year-old neighbor, Michael Skakel, a cousin of Robert F. Kennedy Jr., has been released on $1.2 million bond.

Those conditions include Skakel wearing a GPS device, not leaving the state of Connecticut without the court's permission, checking in with a bail commissioner "periodically" and having no contact with the Moxley family.

Skakel was convicted of beating his neighbor Martha Moxley to death with a golf club. The murder was in 1975, but Skakel was found guilty in 2002 and has been in jail ever since. (Via ABC)

Skakel did not speak to the press, but his family did release a statement, which said in part: "This is the first step in correcting a terrible wrong. We look forward to Michael being vindicated and justice finally being served."

The victim's mother, Dorothy Moxley, was also in court Thursday, and she expressed her disappointment with the ruling.

"I guess we knew that the day would come, so I wasn't completely destroyed, but I wish it hadn't happened."

To be clear, Skakel's murder conviction has not been overturned, but Skakel was granted a new trial based on an appellate judge agreeing that his trial lawyer was incompetent. (Via MSNBC)

Skakel has maintained his innocence throughout his time in prison.