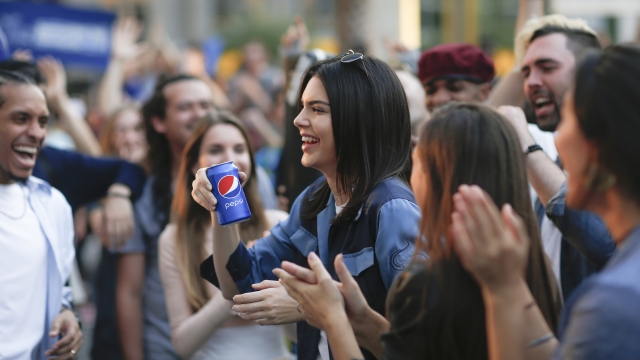 SMS
Pepsi Pulls Kendall Jenner Ad After Major Backlash
By Katherine Biek
By Katherine Biek
April 5, 2017
In the ad, Jenner handed a can of Pepsi to a police officer as a peace offering during a protest.
SHOW TRANSCRIPT

Pepsi is pulling an ad starring model Kendall Jenner that left a bad taste in some people's mouths.

The beverage company was criticized for co-opting recent resistance movements, like Black Lives Matter and anti-Trump protests, to sell soda.

The almost three-minute ad features a cellist, a photographer and some dancers protesting in the streets. Jenner is busy modeling in a blond wig, but eventually rips it off and joins the crowd. The ad ends with Jenner handing a can of Pepsi to a police officer as a peace offering. He smiles after taking a sip.

People on social media were quick to call out Pepsi for putting a white, privileged young woman into the role of peacemaker.

Some also pointed out that the image of Jenner giving the officer a Pepsi looks a tad too similar to the now-iconic photo of a female Black Lives Matter protester being arrested in front of a police line in Baton Rouge after the fatal shooting of Alton Sterling.

Pepsi initially responded to the criticism by saying the ad "reflects people from different walks of life coming together in a spirit of harmony, and we think that's an important message to convey."

The company later apologized and said, "We did not intend to make light of any serious issue."

Jenner hasn't said anything about the controversy. But before the commercial was out, the "Keeping Up with the Kardashians" star said she was "thrilled" to be part of the campaign. 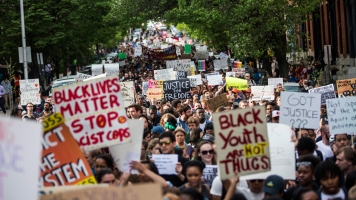 Pepsi's message of peace in times of protest isn't a new idea for the soda world.

Rival Coca-Cola did something similar with its "Hilltop" ad during the Vietnam War.