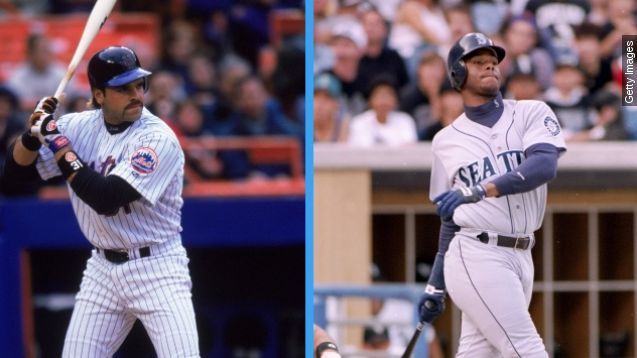 Mike Piazza and Ken Griffey Jr. will be the newest members of the Baseball Hall of Fame. Griffey received more votes than any other player ever.

The Baseball Writers’ Association of America has elected the two newest members to the Baseball Hall of Fame.

Outfielder Ken Griffey Jr. and catcher Mike Piazza are regarded as some of the best to ever play their positions, but their paths to Cooperstown couldn’t have been more different.

Griffey is the son of a big leaguer and a former first overall pick that dazzled scouts as a teen. He lived up to the hype, winning 10 Gold Gloves and mashing 630 home runs, the sixth most all time.

Mike Piazza, on the other hand, was an afterthought during the 1988 draft, going to Los Angeles in the 62nd round. In fact, he was only drafted because Dodgers' manager Tommy Lasorda was friends with Piazza’s dad.

But he made the most of his opportunity and retired as the best hitting catcher of all time, with more than 400 home runs and a dozen All-Star Game appearances.

And for both Griffey and Piazza, their Hall of Fame candidacy mirrored their draft status. Griffey breezed in on his first year of eligibility, thrilling his family by appearing on a record 99.3 percent of ballots.

Piazza had to wait four years before crossing the 75 percent threshold needed to make it into the Hall. (Video via SNY.TV)

But just as important as who made it into the hall is who was shut out. Roger Clemens, Barry Bonds and Mark McGwire were shut out of most ballots, sending a clear message that baseball writers are unforgiving to those accused of using steroids.

Griffey and Piazza played through the '90s, which has become known as baseball’s steroid era. Though both had huge home run numbers, Griffey was never accused of using performance enhancing drugs. Piazza faced some accusations, but without any solid evidence, those were dismissed as speculation.

Piazza and Griffey will receive their plaques in Cooperstown, New York, at the Hall of Fame induction ceremony in July.