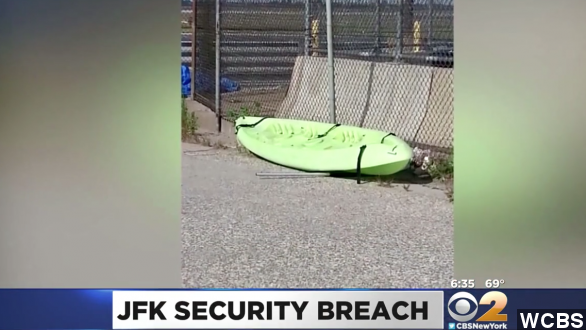 By Lauren Zima
July 28, 2014
Kayakers — yes, kayakers — are the most recent folks to get through JFK's $100 million security system.
SHOW TRANSCRIPT

Two kayakers say they nearly died, but now they've been cited for trespassing. (Via Getty Images)

"We were almost drowning — we couldn't hold on to the boat."

The pair of 21-year-old kayakers are telling New York City media their vessel flipped in Jamaica Bay early Saturday morning. They were able to grab onto a pier and get to safety — problem is that pier is property of JFK International Airport.

"The surveillance cameras and motion detectors at the airport never detected the men." (Via News 12 Long Island)

And that has media saying....

"It's yet another security breach at JFK."

In 2012 — a different waterway breach that made headlines. (Via Getty Images)

As ABC reported, a man who had problems with his jet ski swam to shore, scaled a fence, crossed runways and walked into a terminal to get help.

"We have deficiences and they have to be addressed."

That man went undetected by a security system valued at at least $100 million.

It's a system that even those using it don't believe in. A spokesperson for the Port Authority's police union told the New York Post...

“Once again a perimeter security breach at JFK Airport raises serious concerns about the Port Authority’s Perimeter Intrusion Detection System, a system the PAPBA believes is a failure."

Though the Port Authority itself has a different story, telling CBS...

"The kayakers did not breach the secure airfield. They were seeking help in a restricted water area and at a light pier."

But all this comes not long after other seemingly scary security breaches in New York City. Just days ago, American flags atop the Brooklyn Bridge were replaced with white ones. The incident is under investigation. (Via CNN)

And in September a group of men base-jumped off the Freedom Tower. (Via New York Daily News)

The kayakers were not actually arrested, but were cited. They were also treated for hypothermia.