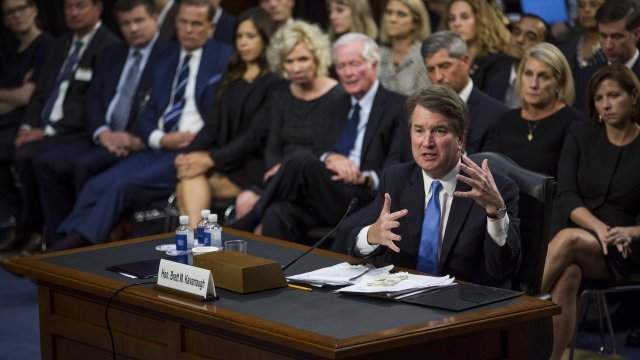 Democrats pressing Supreme Court nominee Brett Kavanaugh on presidential power got few answers Wednesday, at a time when the limits of the office could be tested.

Sen. Dianne Feinstein asked Kavanaugh if a sitting president can be required to respond to a subpoena. He said, "I can't give you an answer on that hypothetical question."

A few hours later, Sen. Patrick Leahy grilled him on pardons and also got no real substantive response.

Special counsel Robert Mueller is investigating the Trump campaign's possible ties to Russia. A newly minted Justice Kavanaugh could be forced to rule on issues relating directly to the man who nominated him.

As a part of the special counsel investigating then-President Bill Clinton, Kavanaugh believed a president could be indicted. He says after working in the George W. Bush White House and experiencing the fallout from 9/11, he changed his mind.

In an opinion in the Minnesota Law Review, Kavanaugh said: "Congress might consider a law exempting a President, while in office, from criminal prosecution and investigation, including from questioning by criminal prosecutors or defense counsel. ... The indictment and trial of a sitting President, moreover, would cripple the federal government, rendering it unable to function with credibility."

Because of this modified perspective, Democrats looked to clarify where he'd stand going forward on presidential power. Kavanaugh did say he is not supposed to be influenced by political pressure from the executive or from Congress, only offering this small nugget of insight to Democrats: "No one is above the law in our constitutional system."

The hearing continues Thursday, when each senator on the committee will get an additional 20 minutes to question the judge.