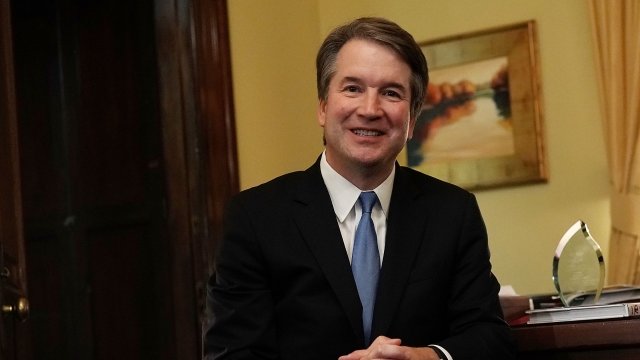 SMS
Kavanaugh Said He'd Overturn Ruling Upholding Independent Counsel
By Ethan Weston
By Ethan Weston
July 19, 2018
His statement on the issue was made in 2016.
SHOW TRANSCRIPT

President Donald Trump's Supreme Court nominee said he'd like to "put the final nail" in a Supreme Court ruling upholding the constitutionality of an independent counsel.

Judge Brett Kavanaugh made that statement while speaking to a conservative group in 2016.  The ruling he's referring to is from 1988, but the actual law in question expired in 1999. It has since been replaced by a Department of Justice rule about special counsels like Robert Mueller.

It's not clear if his statement means that Kavanaugh considers Mueller's investigation unconstitutional, but it's already raising a few eyebrows on the left. Senate Minority Leader Chuck Schumer called the statement "deeply, deeply troubling" and has called for Kavanaugh to recuse himself from the Mueller investigation.

But one law expert told Newsweek there's a big difference between independent counsel that Kavanaugh was talking about and special counsels like Mueller. According to the outlet, independent counsel was given much more freedom, with little rules or oversight. The special counsel, however, is regulated, and people within the Justice Department keep tabs on the investigations.

Kavanaugh has previously expressed a dislike for the 1988 ruling and has been skeptical about whether a sitting president can be indicted.