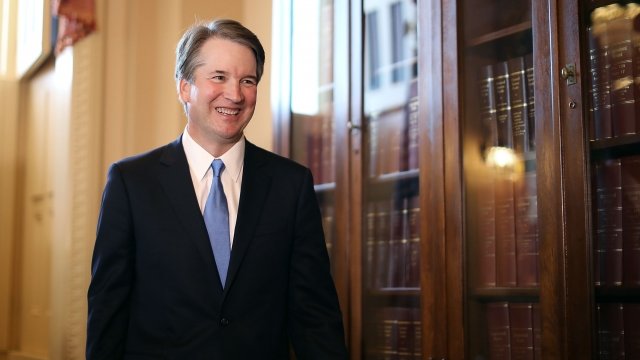 SMS
Kavanaugh Confirmation Hearing To Begin As Scheduled Tuesday
By Katherine Biek
By Katherine Biek
September 4, 2018
At least one lawmaker called for the hearing to be delayed after the Senate received an additional 42,000 pages of Kavanaugh documents Monday.
SHOW TRANSCRIPT

After nearly two months of meeting with lawmakers individually, Judge Brett Kavanaugh is sitting before the Senate Judiciary Committee Tuesday.

The panel will be vetting Kavanaugh over his nomination to succeed retired Supreme Court Justice Anthony Kennedy.

Senate Minority Leader Chuck Schumer called for the hearing to be delayed Monday evening, citing 42,000 more pages of documents the Senate had just received on Kavanaugh's time with the George W. Bush administration.

Schumer tweeted, "Not a single senator will be able to review these records before tomorrow." But a couple hours later, the Senate Judiciary Committee said its majority staff had done just that, and that Kavanaugh's hearing would begin as scheduled Tuesday.

Beyond his work with the second Bush administration, Kavanaugh also worked on an investigation that ultimately led to then-President Bill Clinton's impeachment. So the nominee's got a pretty extensive paper trail.

In fact, a spokesman for Republicans on the Senate panel said it's reviewed more than 480,000 pages — which is more Executive Branch material than what was provided on the last five confirmed nominees altogether.

Kavanaugh's hearing is expected to last three to four days. Opening statements by the committee and Kavanaugh will take place Tuesday and then lawmakers will start questioning him Wednesday. He needs at least 50 votes to be confirmed.