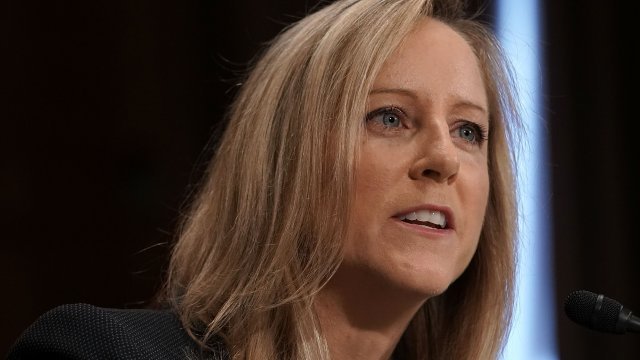 SMS
Kathy Kraninger's Confirmation Casts Doubt On CFPB Future
By Bianca Facchinei
By Bianca Facchinei
December 10, 2018
If the agency's new director follows in the footsteps of her predecessor, the CFPB might not have a future at all.
SHOW TRANSCRIPT

The confirmation of White House official Kathy Kraninger as head of the Consumer Financial Protection Bureau has reignited debate over one of Washington's most controversial institutions.

The CFPB has been around since 2011, and it's acted as a tug-of-war between both sides of the aisle ever since. It was created after the passing of the Dodd-Frank bill, which imposed greater regulations on the financial industry after the 2008 recession. While the agency enjoyed broad support from President Obama and the Democrats for protecting consumers, it was never embraced by Republicans, who saw it as a burden on business. In fact, it was only five months into President Trump's term that Republicans attempted to repeal Dodd-Frank.

That repeal bill would give Congress influence over the CFPB's funding. Currently, the bureau's funds come from the Federal Reserve, meaning it's protected from Congressional defunding efforts.

That's not the only threat facing the bureau, though. In May, Trump signed two pieces of legislation intended to weaken the CFPB's auto lending guidelines and bank regulations. With Trump appointee Kraninger set to begin a five-year term, we could see more dismantling efforts made — but not without a fight from the incoming House majority.

Democrats have made clear their issues with Kraninger, who most recently served in the Office of Management and Budget. They cite her lack of experience in financial industry regulation and the OMB's response to Hurricane Maria as just some the issues that concern them. One of her most vocal critics has been Massachusetts Democrat Elizabeth Warren, who came up with the idea for the CFPB. Although Obama appointed Warren to help set it up in 2010, he ended up nominating Richard Cordray as director.

In her testimony, Kraninger said, "Under my stewardship, the bureau will take aggressive action against bad actors who break the rules by engaging in fraud and other illegal activity," and added the CFPB "must be accountable to the American people for its actions, including its expenditure of resources."