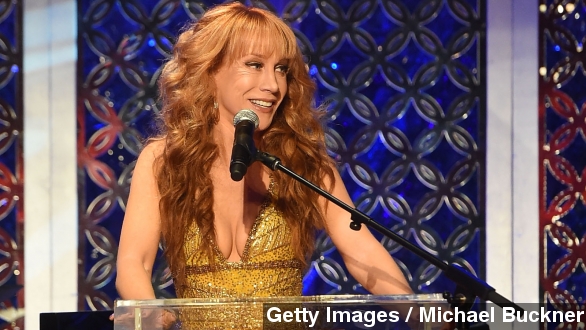 In a statement on Twitter, Griffin said, "I do not want to use my comedy to contribute to a culture of unattainable perfectionism and intolerance towards difference... My style does not fit with the creative direction of the show & now it's time to move on."

Griffin was brought on to replace Joan Rivers in what was seen as a solid move by E!, but in recent weeks, the show has come under serious fire. (Video via E! / "Fashion Police")

And it all started with a joke Giuliana Rancic made on air about Disney star Zendaya Coleman at the Oscars that was seen as racist.

"She has such a tiny frame that this hair overwhelms her. I feel like she smells like patchouli oil. Or weed," Giuliana Rancic said.

Rancic later apologized for the comment, but that didn't stop her co-star Kelly Osbourne from leaving the show.

This week, Griffin aired some tensions with producers in an email exchange with the Chicago Sun-Times. She wrote, "The show wanted to do a running segment called 'Whore Score.' Um, no thanks. I think we can do better."

E! responded to the news with a statement saying, "We wish her all the best and are grateful for her time on the show, as well as the many laughs that she gave us all."

"Fashion Police" is scheduled to return March 30 as scheduled with Rancic and Brad Goreski. It's unclear if E! is searching for replacements for Griffin and Osbourne.