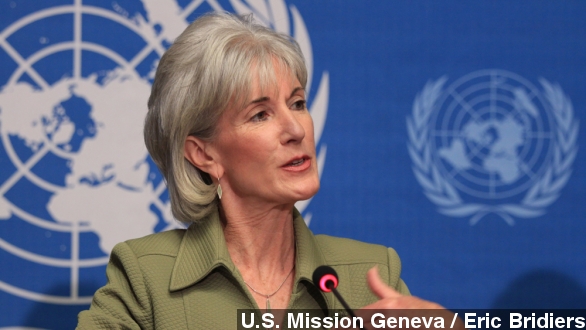 Despite Thursday's announcement that 7.5 million people have signed up for the Affordable Care Act — exceeding the 7 million sign-ups goal — White House officials said Health and Human Services Secretary Kathleen Sebelius plans to step down. (Via Healthcare.gov, The White House)

According to USA Today, two unnamed senior White House officials said President Obama accepted Sebelius' resignation and that she made the decision on her own.

Sebelius, who is 65, ends a five-year tenure as HHS secretary and will leave her post as the public scapegoat for last year's botched Obamacare rollout.

Sebelius took the brunt of attacks from lawmakers...

Kathleen Sebelius: "Insurers have this information about their customers because that's who's being paid and that's who's enrolling."

Tom Price: "It begs credulity, madame secretary, that you don't know." (Via C-SPAN)

And also apologized to Americans for the glitches on Healthcare.gov that marred the rollout.

Kathleen Sebelius: "You deserve better. I apologize. I am accountable to you for fixing these problems." (Via PBS)

Ed Henry: "Once they turned the page on the website failures, but also getting those signups up, it was an opportunity for the president to say, 'See ya later.'" (Via Fox News)

Not to read too much into it, but Sebelius was also notably absent from President Obama's Rose Garden speech in which he announced Obamacare had 7 million sign ups.

But CNN's Athena Jones says Sebelius' is leaving on a high note:

"One last thing those critics could point to. Kathleen Sebelius was able to show this positive number then bow out."

President Obama is expected to nominate Office of Management and Budget Director Sylvia Mathews Burwell to replace Sebelius in the near future.