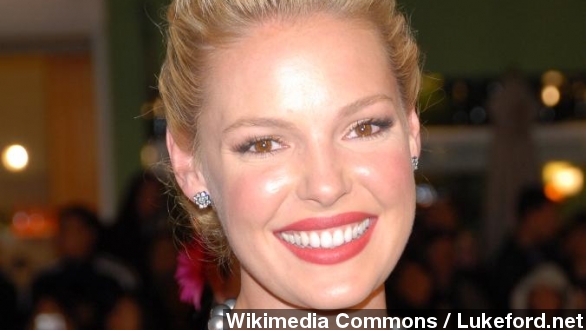 SMS
Katherine Heigl Suing Pharmacy For $6 Million Over Tweet
By Laura Heck
By Laura Heck
April 10, 2014
The actress is suing the NYC-based pharmacy for tweeting a promotional photo of her holding Duane Reade bags without her permission.
SHOW TRANSCRIPT

"Now the company tweeted a photo of Katherine coming out of one of their New York stores last month with the caption, 'Love a quick #DuaneReade run? Even @KatieHeigl can't resist shopping #NYC's favorite drugstore.'" (Via Access Hollywood)

The Walgreens Co. subsidiary has since taken the March 18 posts down, but it might be too late to escape the legal repercussions. (Via Twitter / @DuaneReade)

TMZ obtained the lawsuit and reports that it reads like a braggy resume: "Plaintiff is a highly successful television and motion picture actress, producer and celebrity. ... Plaintiff continues to be in high demand in the entertainment industry."

According to IMDb, only one of the actress's movies has been released per year since 2010, but she has four movies in the works for 2014.

New York Daily News reports the lawsuit claims that, as a celebrity whose movies have grossed more than $1 billion, Heigl is owed $6 million for the exploitation of her image for commercial gain.

So, we did the math. If Heigl does get the $6 million she's asking for, and the tweet had 94 characters, that means ... Let's see... (make writing motion, act like you're thinking REALLY hard) Carry the one ... A grand total of almost $63,830 per character. Phew, that's one expensive tweet.

But the former "Grey's Anatomy" star says she would donate the money to her foundation that helps find homes for dogs. Classy move, Katherine.