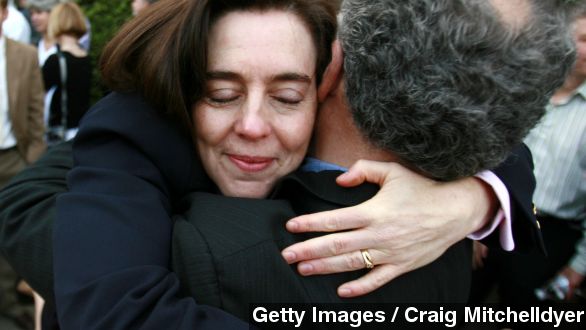 When Oregon's Kate Brown is sworn in next week, she’ll make history as the country’s first openly bisexual governor.

“As you can imagine, between now and Wednesday there is a lot of work to be done and that's what I'm going to go back and do,” Brown told reporters. (Video via The Oregonian)

Brown is taking over the job of Oregon Gov. John Kitzhaber. He submitted his resignation Friday over corruption allegations involving his fiancée.

Fifty-four-year-old Brown — a Democrat — has been in Oregon politics since 1991 serving in both the House and Senate. She was outed by an Oregon newspaper in what she called a “forced coming out.” (Video via Oregon Social Business Challenge)

She described what that was like in 1992: "I believe it was during my early 30’s that I figured out who, or what, I am. But it wasn’t until it was written in the Oregonian newspaper that I was bisexual that I had to face the inevitable and let those around me know.”

“I truly believe I can make Oregon a better place to live,” Brown said in 2008.

According to the Gay & Lesbian Victory Fund, there are about 525 openly LGBT public officials nationwide.

"I've witnessed the difference it makes when our community not only had a seat at the table, but sits at the head of the table." (Video via Victory Fund and Institute)

Brown will be history's second LGBT governor. New Jersey's Jim McGreevey announced he was gay before resigning in 2004. (Video via CBS)

Brown and her husband have two adult children from his previous marriage and live in Portland. She takes office on Wednesday.