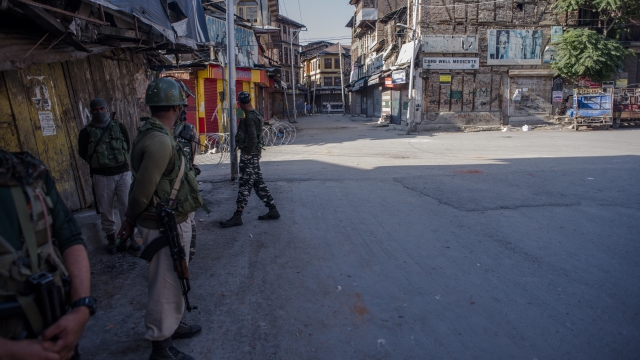 A communications blackout in Kashmir has been partially lifted, according to Indian officials.

The Indian government revoked Kashmir's autonomous status two weeks ago. That means the disputed territory no longer has the right to its own constitution. Indian Prime Minister Narendra Modi — who is a Hindu nationalist — has said the decision will free the Muslim-majority territory of "terrorism."

Protests broke out and tens of thousands of Indian troops were deployed to the region on August 5. Kashmiri government sources told the AFP that at least 4,000 people have been detained. Most of them were flown away in military aircraft because prisons are full.

Kashmir has been in a state of lockdown, with landlines, internet and cellphone coverage all being suspended. On Saturday, authorities in Kashmir said they were restoring landline phone service and eased up on movement restrictions for residents.

But according to India News 18, low-speed mobile internet was restored but then shut back down Sunday to quell the spread of rumors.