Karen Pence To Newsy: We Need To Pay Attention To Mental Health 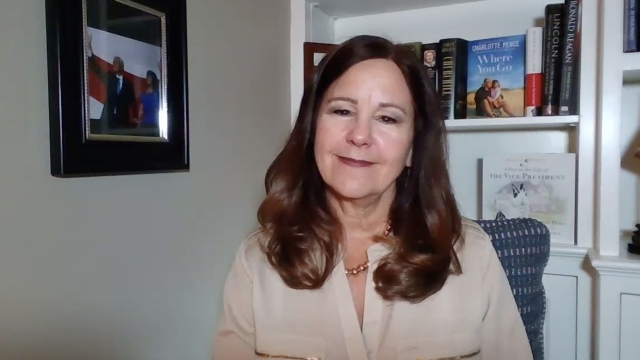 SMS
Karen Pence To Newsy: We Need To Pay Attention To Mental Health
By Amber Strong
By Amber Strong
April 23, 2020
Pence and the Department of Veterans Affairs want Americans in need to know that help is available.
SHOW TRANSCRIPT

Karen Pence, the vice president's wife and the lead ambassador for the Veteran’s Affairs PREVENTS task force, tells Newsy all Americans must pay attention to their mental health now “more than ever" before.

"A lot of us are going through something we've never gone through before. And it can be a little scary and very intimidating."

“There have been some increase in calls to the veterans crisis line, for example.”

And private services also report seeing an uptick in calls.

“Within a few days of the stay-at-home orders being put in place, we were hearing many veterans reaching out to us saying that they already felt depressed, were already feeling anxiety.”

Chelsea Elder runs Adaptive Adventures, a Colorado-based organization encouraging the physical and mental health of veterans who have disabilities.

“We've pivoted everything. We've had our staff members take trailers home filled with equipment. And we just started going to providing these programs via ...  Zoom-based programs where everybody can join in and participate."

And Pence says the advice being given to vets can help all Americans — things like getting enough physical exercise and maintaining a routine.

“So you kind of need to say, what are the things that helped me? But then especially you need to schedule those things into your day. So I've been telling families, a great thing to do is to say, OK, every day from two to three, we're going to read as a family."

"For kids, this is kind of like their 9/11. This is the crisis that they're trying to understand that affects the entire country. And they need to talk about it."

Newsy's Amber Strong: "As someone, speaking very candidly, who struggles with anxiety and depression, it's getting difficult to self-isolate. And then we see people across the country who are just tired of self-isolating. We see protesters. We see people going out. Is the message coming from this White House still going to be we need to social distance at this time?

Pence: "I don't know what each governor's doing for their state. I first of all, just want to say thank you for saying you you struggle with anxiety and depression."

"Honestly, I think, you know, it's important to still follow the physical mitigation that we're supposed to be doing: washing our hands, staying home if we feel sick, wearing the mask, social distancing, coughing into our sleeve, not touching our face. All of those things are really important right now. And I think it's a way to respect others, you know, to make sure that that if you happen to be carrying the virus, you don't infect someone else.”

Now, Pence and the VA say they want to reiterate that help is available.

The number for the National Suicide Prevention Lifeline is 1-800-273-8255. Press 1 if you are a veteran, but, of course, that number is for anyone in need.