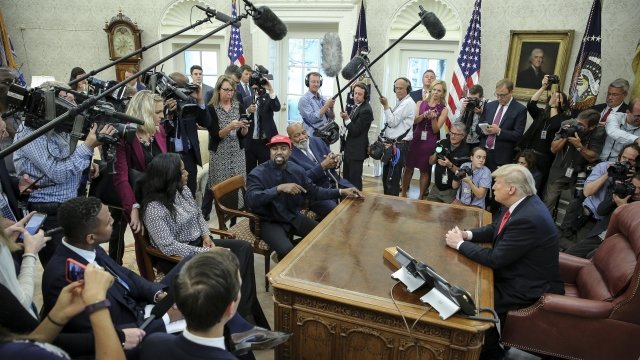 By James Packard
October 18, 2018
Kanye West made some eyebrow-raising claims during his Oval Office visit. But what about that claim about 4,000 new jobs in Wisconsin?
SHOW TRANSCRIPT

You've probably heard a lot about Kanye West's latest foray into politics. It came in a recent trip to the Oval Office. His ranting had elements of various political and social arguments. In the process, he made a couple fact-checkable claims.

Namely, on the economy.

"We can empower our factories," West said, "so we can bring not only Adidas on shore, we can bring Foxconn and set up a factory in, I think, Minnesota. 53,000 — "

The message there is accurate, but technically those jobs don't exist yet. And the $53,000-a-year figure is an average. That doesn't mean that's what everyone is making.

West is talking about a deal Foxconn struck with Wisconsin Gov. Scott Walker. The Taiwanese company said it will invest up to $10 billion in a new factory that could employ up to 13,000 people. Wisconsin has agreed to give the company $150 million in tax breaks. If Foxconn invests at least $9 billion and employs those 13,000 people, the state will pay the company an additional $2.85 billion.

Crews have broken ground on the facility, but Foxconn isn't actually manufacturing anything there yet. West said 4,000 people will work at the facility. Initially, Foxconn plans to bring in 3,000 workers, and eventually it aims to employ 13,000.