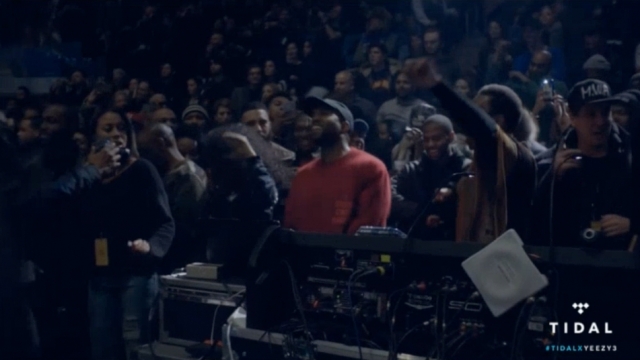 Kanye West debuted his seventh solo album, "The Life of Pablo," alongside the latest installment of his fashion line at Madison Square Garden.

West debuted the new album in conjunction with Yeezy Season 3, the latest installment of his fashion line with Adidas, in front of a live audience at Madison Square Garden.

The event was also live-streamed in select theaters around the world and online through streaming service Tidal, owned by West’s “Watch the Throne” partner Jay-Z.

Supermodel Naomi Campbell and rapper Young Thug were among the models who walked in the show.

Pusha T, Travis Scott and the Kardashian clan were in attendance. Michael Jordan apparently declined his invitation. It is unclear if any “awesome wrestlers” made it.

The final tracklist for “The Life of Pablo” includes 10 songs with appearances by artists Frank Ocean, Kid Cudi, Rihanna and Chance the Rapper and production from Swizz Beatz, Q-Tip and Rick Rubin.

West will be the musical guest for the Feb. 13 episode of “Saturday Night Live” with host Melissa McCarthy. This marks his first appearance on the show since debuting eventual “The Life of Pablo” track “Wolves” alongside Sia and Vic Mensa at SNL 40 in 2015.

After a busy week for West, which also included hosting a party celebrating the Yeezy Season 2 zine, he apparently doesn’t want to be bothered until Monday.

Connor leads post-production at Newsy. Coming from a background in film production, he joined the team in 2014 to help Newsy build out field production operations. The job has since taken him across the country and around the world — shooting, editing, and producing stories. Now, Connor leads content production operations across Newsy’s growing footprint of newsrooms and bureaus. He listens to an improbable number of podcasts, wishes he could dunk a basketball, loves a good movie, and hates writing in the third person. @connorhickox