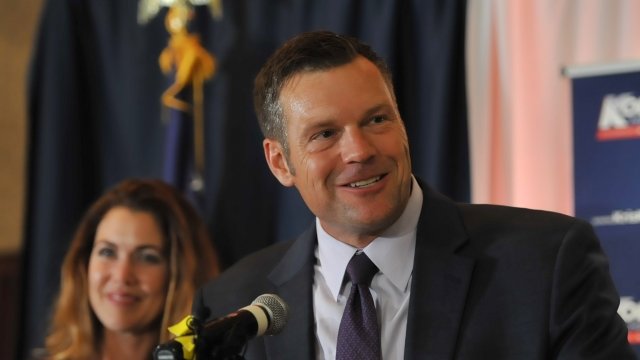 SMS
Kansas High Court Rules Grand Jury Must Investigate Kobach
By Ethan Weston
By Ethan Weston
September 2, 2018
Kansas is one of the few states that allows citizen petitions to result in the formation of a grand jury.
SHOW TRANSCRIPT

The Kansas Supreme Court says a grand jury will need to investigate whether Kansas Secretary of State and Republican gubernatorial candidate Kris Kobach intentionally messed up state voter registration in the 2016 election.

The Lawrence Journal-World reports the whole case began in 2016 when a Lawrence, Kansas, man named Steven Davis filed a petition accusing Kobach and his office of "destroying, obstructing or failing to deliver online voter registration."

The petition was rejected by a Kansas district court, but the state's court of appeals overruled the lower court, saying a grand jury should be convened. After that, Kobach decided to go to the state's highest court, and on Friday, that court said it wouldn't review the case.

Kansas allows for citizens to call for grand juries via petitions. It's not clear when the grand jury will actually be convened — the Court of Appeals still has to issue a "final mandate."