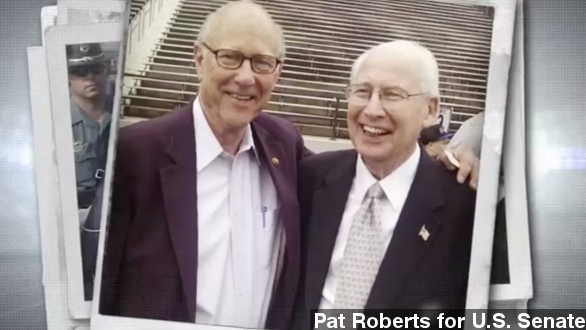 There's no doubt about who Kansas State football coach Bill Snyder is voting for in his state's upcoming U.S. Senate election, and that could be getting him into trouble.

PAT ROBERTS FOR U.S. SENATE: "Who is coach Bill Snyder supporting for Senate?"

The problem is Kansas State President Kirk Schulz supposedly wasn't aware of it and neither was Snyder.

Shortly after the video was released, President Schulz posted on the university's website, "Kansas State University does not endorse political candidates, and employees do not speak for the university when they endorse candidates. Employees should also avoid using their university-affiliation in any endorsements or statements."

Schulz also said, in an email to employees, the school reached out to the Roberts campaign to remove the video and stop running it, but, "they declined to honor our request."

Snyder also wants the ad taken down. The coach said he wasn't aware his interview would be used like that and publicly asked it be removed during his post-game press conference Saturday.

BILL SNYDER VIA KANSAS STATE ATHLETICS: "I've made a mistake, and I've embarrassed our university. That's my responsibility. That's my error. I'm not going to speak to it anymore right now."

But here it is — still posted to Pat Roberts' YouTube page as of Sunday morning. According to The Wichita Eagle, Roberts' campaign manager said in a statement, "we haven’t been contacted by the University."

It's unclear why it's still up after both Snyder and the university have voiced their opinions about it publicly, but Slate's Mike Pesca, appearing on MSNBC, notes that it isn't abnormal for respected sports figures to publicly endorse politicians. It's been done many times before.

MIKE PESCA VIA MSNBC: "I think Snyder wanted to back away from it just because of who he is. If he really wanted to press he probably would've been allowed to."

A poll released by Fox News Saturday showed Roberts in a virtual dead heat with Independent challenger Greg Orman. The gap is within the poll's margin of error.

There's no indication that Snyder will be formally punished for appearing in the video. Midterms in Kansas and across the country are Tuesday.