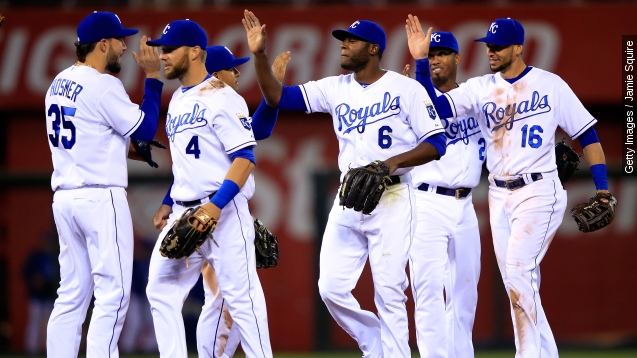 We're sure you've heard it before: Those pesky, ballot-stuffing Kansas City fans are still at it — trying to field a starting All-Star lineup made entirely of Royals. (Video via KSHB)

And we're sure you've heard this before too: The MLB All-Star Game matters, big time.

But what you haven't heard: there's one thing that doesn't really matter about the All-Star game. And it's the starters. Stick with us.

First, MLB All-Star rosters are deep — 34 players deep. That's nine more than the normal active-player roster for a team. And since it's the All-Star Game and fans wants to see their players actually play, substitutions happen early and often.

In each of the last five All-Star games alone, roster replacements of position players started in the top or bottom of the fourth inning every game — not counting a rare first-inning exit for Robinson Cano in 2013 due to injury.

In 2014, five position players weren't replaced just once but twice throughout the nine-inning game.

And the replacements generally account for an influx in offense during crucial times. In the past five years, the teams combined for 11 runs before the first starter was replaced (again, not counting Cano's injury in 2013). Compare that to the 18 runs scored after teams underwent those mass changes.

If you want to look for a starter who could predictably have a huge impact on the game, look at the pitchers.

For instance, Cardinals pitcher Adam Wainwright's rough start last year put the National League in a 3-0 hole last year before his team got to the second inning, and the N.L. never took the lead back.

So vote on, Kansas City fans! Just know the team may be a bit Royal-less in those very crucial late innings.

According to MLB's latest vote tallies, the Royals lead in seven out of nine categories. Tigers first baseman Miguel Cabrera and Angels outfielder Mike Trout are the only two non-Royals leading their positions. (Video via WCPO)

This video includes images from Getty Images, statistics from Baseball-Reference.com and music from Centz / CC BY NC ND 3.0.