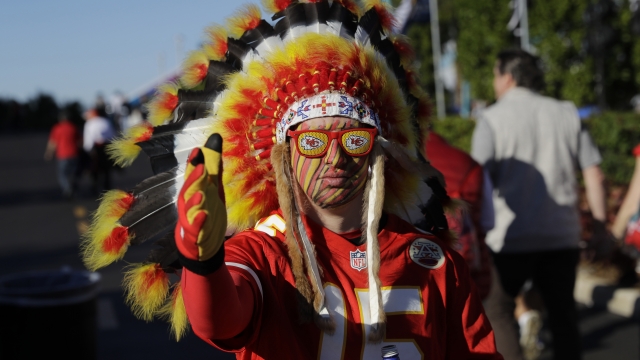 Something will be different in the stands at the first game of the NFL season Thursday night. Kansas City Chiefs fans won't be allowed to wear headdresses or Native American-style face paint.

Newsy's sister station KSHB spoke with a professor from a nearby Native American university, as well as some fans. Their responses were pretty uniform.

"[In] 2020, there should be no excuse that this racist mockery is still taking place," Jimmy Lee Beason II, who teaches in Haskell's Department of Indigenous and American Indian Studies, said.

"It's been a long time coming to make some change there," Danny Sandage said. "I think change needs to occur."

"I think we have to be more mindful about images that can be offensive to people," Summer Friedman said.

"I know people are very rah-rah about the whole costume, the get-up and everything like that," said Jean-Luc Monroe. "But to be honest with you, I'm just there to enjoy football. I could really care less about headdresses and face paint."

The reigning Super Bowl champions announced the decision in August. The team said it came from discussions with local Native American leaders that had been going on since 2014.

The Chiefs also announced last month the team is discussing the future of its "tomahawk chop" celebration amid complaints that it's racist.

"It encourages this behavior on the part of the fan base to continually just disrespect us and not actually look at us like actual human beings," Beason said. "We're always viewed as these one-dimensional caricatures who are now stuck somewhere in the past."

Kansas City's change comes as other professional sports teams with Native American mascots face increased scrutiny. Ahead of this season, Washington's NFL team chose to drop "Redskins" as its name after years of controversy and calls to change it.