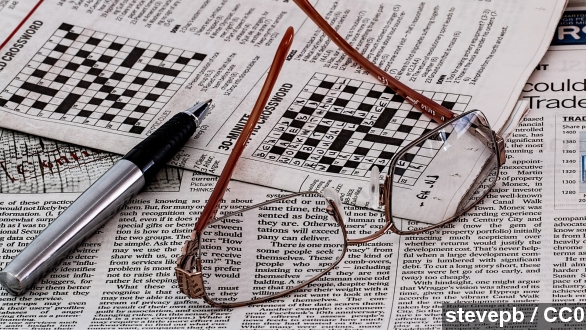 By Steven Sparkman
October 20, 2014
The Kamra corneal inlay helps patients see up close without impairing distance vision, but it's not approved in the U.S. despite wide use in Europe.
SHOW TRANSCRIPT

Older Americans who find it more and more difficult to see up close might be able to ditch those reading glasses soon — assuming they're up for an expensive surgery.

A study presented at the American Academy of Ophthalmology's annual convention said, "A thin ring inserted into the eye could soon offer a reading glasses-free remedy for presbyopia, the blurriness in near vision experienced by many people over the age of 40."

The thin ring they're talking about is AcuFocus's Kamra, a small, thin disk that's inserted into the eye directly above the cornea at a per-eye price roughly equivalent to Lasik.

The disk has a small hole over the pupil that lets in a narrow beam of light. If you've ever tested your vision by looking through a pinhole, you know that focusing light helps improve near vision. Some people even wear glasses made primarily out of pinholes.

The Kamra inlay essentially does that all the time, allowing patients to see up close without detracting from their vision at a distance. It's billed as the glasses-free solution to blurry cellphones and newspapers by clinicians who implant them.

But none of those clinicians are operating in the U.S. Even though Kamra has been available to the public in Europe and Asia for years, the FDA hasn't approved its use, though it's getting close.

This past summer, a committee within the agency said the benefits of Kamra outweigh the risks, though the vote very nearly went against the product. The FDA still has some safety concerns and will likely require further testing.

But one of the major selling points of corneal inlays is that, if you have problems with them, they can be removed — although two surgeries just to get rid of reading glasses might be too steep a price tag for many patients.