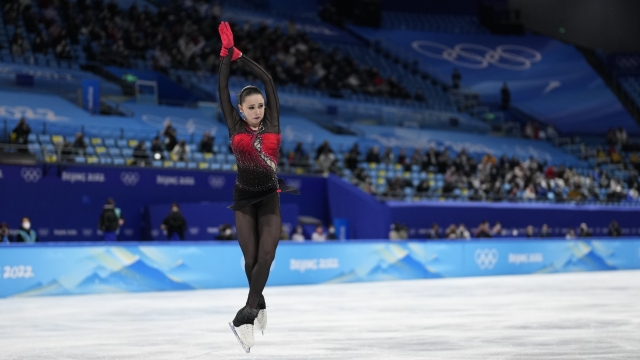 SMS
Kamila Valieva Finishes Fourth In Women's Free Skate At Olympics
By Meg Hilling
By Meg Hilling
February 17, 2022
The 15-year-old's performance was highly contested after she had tested positive for a heart medication considered a performance enhancing drug.

The Russian skater placed fourth in the women's free skate program, after falling multiple times during her routine. A performance that was highly contested to begin with after it was revealed she had tested positive for a heart medication considered a performance enhancing drug.

Taking first and second place were her teammates, Russia's Anna Shcherbakova and Alexandra Trusova. Japan's Kaori Sakamato took third. These three will receive medals for their achievements. Had Valieva placed in the top three, the International Olympic Committee says no one would have received a medal.

News of Valieva's positive drug test was revealed after she helped Russia win the team event last week. Despite the backlash the IOC has received for allowing Valieva to continue to compete in the winter games, the organization has stood by its decision. The IOC has argued that Valieva, who is 15, is under their protected minor status because of her age and could have been unwittingly exposed to the drug.

Valieva has reportedly claimed she may have come into contact with traces of the drug at her grandfather's home, who is on heart medication.

"Thank you to all of you who tuned in for our live coverage of the women's free skate. That was the most bizarre and heartbreaking event I've seen in my entire life and I hope that it is never repeated," former U.S. figure skater Johnny Weir said.

Current and former Olympic competitors continue to condemn the IOC's ruling and have raised some questions regarding the standard for clean competitions and whether 15 years old is too young to compete in figure skating at the Olympics. Fifteen is the minimum competition age set by the International Skating Union though there are reports it is considering raising the age to 17.

Figure skating in the Winter Games will conclude this weekend with the highly anticipated pair free skate event.