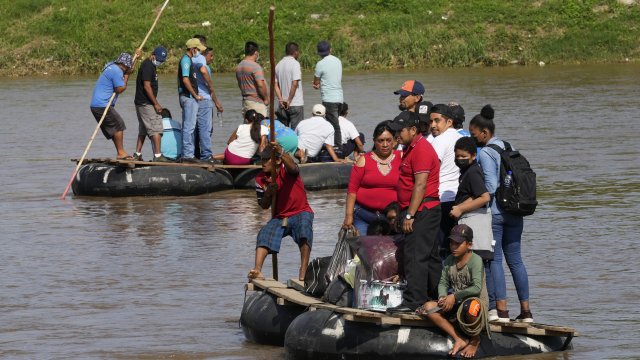 On her first official trip abroad to Guatemala and Mexico, Vice President Kamala Harris had a strong message for Central American migrants.

"Do not come. Do not come. The United States will continue to enforce our laws and secure our border," she said.

Harris has been tasked by President Biden with stemming the record spike in migration to the U.S.

During her trip, she's hoping to secure greater cooperation from Guatemala and Mexico on border security and economic investment.

But how are her diplomatic efforts playing out so far?

To find out, we went to a key area for migrants hoping to make it to the U.S: the Mexico-Guatemala border.

In a shelter on the Mexican side of the border in Tapachula migrants get to rest for a while before continuing their journey toward the U.S.

We asked them to describe the obstacles they're facing along the way.

"The biggest difficulty during this journey has been the extortion by the police," said a migrant who fled gang violence in Honduras and asked for us not to use his name.

He says to make it to southern Mexico, he's had to pay Guatemalan and Mexican police at various checkpoints.

"We did not bring money so they took a high-end phone just to let us cross," he said.

Under pressure from the Biden administration, Mexico and Guatemala have recently agreed to deploy thousands of troops to better enforce their borders.

And while some migrants are caught and detained along the way, many others still find ways to get across, bribing police or paying smugglers to take riskier routes.

"It increases the business of smugglers when they put up more authorities at the borders, but migrants continue to pass," said Olga Sanchez Martinez, the director of the shelter.

Besides pressuring Central American nations to beef up their immigration enforcement, the Biden administration is also hoping to improve living conditions in the region through U.S. investment and humanitarian aid.

But for migrants fleeing gang violence and poverty, there's little hope on the horizon.

"The governments of our countries cannot fix anything. The only thing they know how to do is to exploit the country," said Edwin Giovany Colindres, a Guatemalan migrant.