Kaine Didn't Win VP Debate, But He Did What Clinton Needed Him To 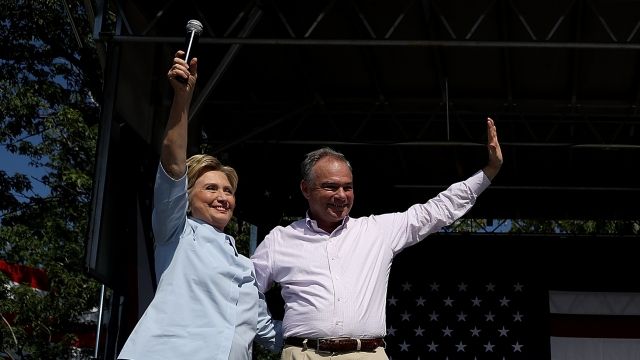 SMS
Kaine Didn't Win VP Debate, But He Did What Clinton Needed Him To
By Matt Picht
By Matt Picht
October 5, 2016
Despite its flaws, Sen. Tim Kaine's debate performance gave Hillary Clinton the ammo she needs to go after Pence and Trump.
SHOW TRANSCRIPT

She even called him to tell him so! Only ... she waited until the morning after the debate to do it.

SEE MORE: This Debate Was Basically Just Pence And Kaine Talking Over Each Other

Several reporters noted that although Clinton sent Kaine a congratulatory email right after the VP debate wrapped up, she didn't speak to Kaine until a Wednesday morning phone call. One reporter described that call as a "love fest."

That's still not quite as strong a reaction as the last Democratic VP, Joe Biden, got after his 2012 debate performance. President Obama wasted no time praising Biden's performance to the press.

Kaine didn't fare nearly as well as Biden; he was criticized for aggressively interrupting Mike Pence and reciting over-prepared lines. Pence's relatively calm and focused performance — combined with his refusal to grapple with Donald Trump's many controversies — had some debate watchers praising Pence as laying solid groundwork for a 2020 presidential run.

But the circumstances were different in 2012. Then, Biden had to recover Obama's campaign from the president's lackluster first debate performance.

This time, all Kaine had to do was confront Pence with his running mate's behavior.

In a Clinton campaign ad, Kaine asked Pence: "More nations should get nuclear weapons — try to defend that."

The ad then cuts to Donald Trump saying, "Wouldn't you rather, in a certain sense, have Japan have nuclear weapons?"