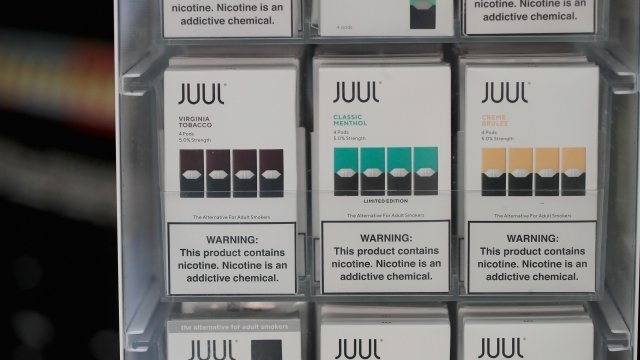 Juul announced Tuesday that it's stopping sales of most of its flavored e-cigarette products in stores and updating age-verification measures for online sales.

It will temporarily stop accepting retail orders for Mango, Fruit, Creme or Cucumber vape pods, but those flavors will still be available for purchase on Juul's website.

Juul said it's also decided to shut down its Facebook and Instagram accounts in order to remove itself from "the social conversation." Its Twitter and YouTube accounts will only be used for non-promotional and testimonial purposes.

The news comes amid the FDA's crackdown on e-cigarette companies it claims are marketing to young people. Research has shown more than 2 million middle and high school students reported vaping in 2017.

"Our intent was never to have youth use Juul, but they are. As the industry leader, we must lead the category in decreasing underage use," he said.

The agency is expected to announce new restrictions on sales of flavored e-cigarettes — which health experts say are especially appealing to youth — as soon as this week.

Juul said in the future, it'll accept orders for those flavored products only from retailers that comply with sales and age requirements.