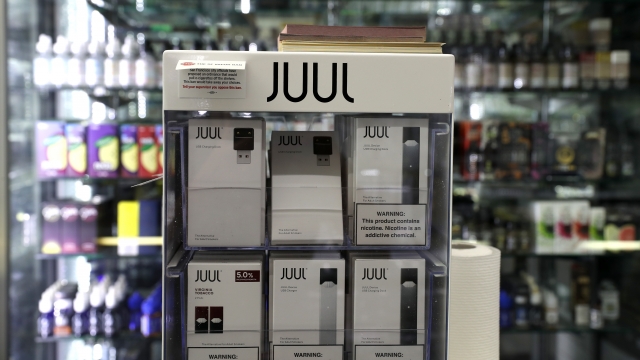 SMS
Juul To Cut 16% Of Its Global Workforce In Restructuring Plan
By Johannah Grenaway
By Johannah Grenaway
November 12, 2019
Juul says its $1 billion cost-cutting plan will help it "focus on reducing underage use" and invest in scientific research, among other things.
SHOW TRANSCRIPT

Juul is laying off 650 people as part of its $1 billion cost-cutting plan. That's 150 more than it previously announced. This is the e-cigarette company's latest effort to restructure amid criticism of its product and its marketing practices.

The jobs being cut make up 16% of the company's global workforce. Juul's also making changes at the top: It says it will not replace its chief marketing officer, who stepped down last month. The company's chief financial officer, senior vice president of advanced technologies and chief administrative officer, have all recently stepped down as well.

The restructuring also involves focusing on direct marketing. The company stopped its TV, print and online ads in September.

Juul has been trying to regain public trust amid scrutiny over its role in the vaping epidemic. Critics say the company targeted minors with its advertising and flavors like mango, creme and cucumber. As of Nov. 5, the CDC had received reports of over 2,000 lung injury cases and 39 deaths related to vaping. Some patients have reported using black-market THC products, some reported using nicotine products like Juul, and some reported using both.

K.C. Crosthwaite, Juul's CEO as of September, said in a statement, "As the vapor category undergoes a necessary reset, this reorganization will help JUUL Labs focus on reducing underage use, investing in scientific research, and creating new technologies while earning a license to operate in the U.S. and around the world."

The company just stopped selling its mint-flavored pods last week and stopped selling its non-tobacco and non-menthol-based flavors last month. Juul says it will explore "new technologies to combat underage use" and continue to invest in its product team.