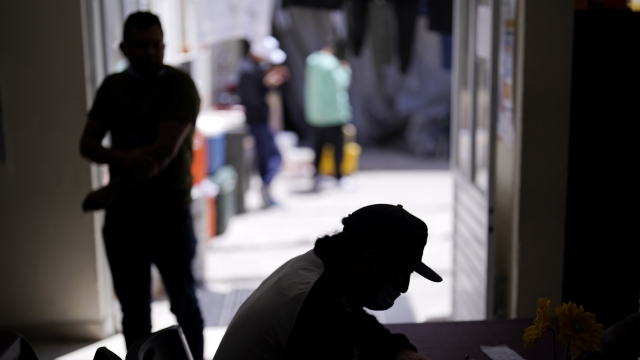 SMS
Supreme Court Hears Fight Over Asylum-Seekers Waiting In Mexico
By Associated Press
By Associated Press
April 26, 2022
The justices are hearing arguments over the "Remain in Mexico" policy, which President Biden originally suspended on his first day in office.

The Biden administration is seeking the Supreme Court's go-ahead to end a controversial Trump-era immigration program that forces some people seeking asylum in the U.S. to wait in Mexico for their hearings.

The justices are hearing arguments Tuesday in the administration's appeal of lower-court rulings that required immigration officials to reinstate the "Remain in Mexico" policy that the administration "has twice determined is not in the interests of the United States," according to court filings.

Texas and Missouri, which sued to keep the program in place, said it has helped reduce the flow of people into the U.S. at the southern border. "Many raise meritless immigration claims, including asylum claims, in the hope that they will be released into the United States," the states told the Supreme Court in a filing.

About 70,000 people were enrolled in the program, formally known as Migrant Protection Protocols, after President Donald Trump launched it in 2019 and made it a centerpiece of efforts to deter asylum-seekers.

President Joe Biden suspended it on his first day in office and Homeland Security Secretary Alejandro Mayorkas ended it in June 2021. In October, DHS produced additional justifications for the policy's demise, to no avail in the courts.

The program resumed in December, but barely 3,000 migrants had enrolled by the end of March, during a period when authorities stopped migrants about 700,000 times at the border.

The heart of the legal fight is whether the program is discretionary and can be ended, as the administration argues, or is essentially the only way to comply with what the states say is a congressional command not to release the immigrants at issue in the case into the United States.

Without adequate detention facilities in the U.S., Texas and Missouri argue that the administration's only option is to make the immigrants wait in Mexico until their asylum hearings.

The two sides separately disagree about whether the way the administration went about ending the policy complies with a federal law that compels agencies to follow rules and spell out reasons for their actions.

Those being forced to wait in Mexico widely say they are terrified in dangerous Mexican border cities and find it very hard to find lawyers to handle their asylum hearings.

Democratic-led states and progressive groups are on the administration's side. Republican-led states and conservative groups have sided with Texas and Missouri. Those include the America First Legal Foundation, led by former Trump aides Stephen Miller and Mark Meadows.

As the court is weighing the asylum policy, the administration is expected to end another key Trump-era border policy that was put in place because of the coronavirus pandemic. It allows authorities to expel migrants without a chance to seek asylum. The decision to end Title 42 authority, named for a 1944 public health law, on May 23 is being legally challenged by 22 states and faces growing division within President Biden's Democratic Party.