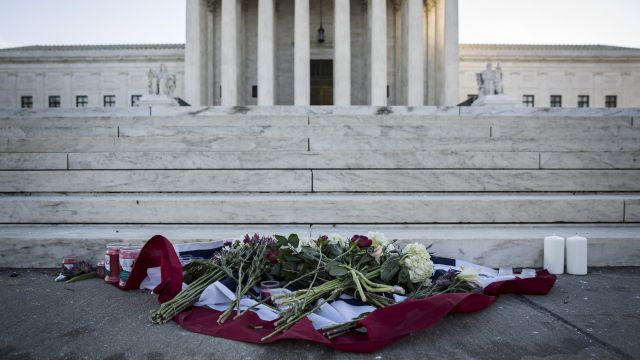 Supreme Court Justice Antonin Scalia's sudden death has raised a lot of questions as to what happens next for the Supreme Court.

President Obama could appoint a new justice, or the seat could remain vacant until a new president is named.

Either way, Scalia's absence could have a major impact on upcoming decisions from the Court. Here are some of the cases on the docket.

Friedrichs v. California Teachers Association is on the list. With Scalia's vote, the Court was expected to overrule a 1977 decision and allow employees to opt out of paying public sector union fees. Now, that case is likely to end in a 4-4 vote, meaning it would defer to the Circuit Court ruling, which sided with the union.

Access to abortion services is another issue up for review by the Court. In the Whole Woman's Health v. Hellerstedt case, justices will decide whether a Texas law that shuttered abortion clinics across the state by requiring abortion doctors to have admitting privileges at hospitals is constitutional.

The court will also hear Zubik v. Burwell, a case that considers whether religiously affiliated organizations should be forced to provide contraception to female employees.

The justices are also set to review President Obama's executive actions on immigration, which would give more than 4 million undocumented immigrants the right to stay in the U.S.

Affirmative action is up for debate, too. Fisher v. the University of Texas examines the role that race plays in college admissions.

In any of these cases, if the Supreme Court's ruling is 4-4, then the lower court's decision stands. But, as Politico points out, the issues can be revisited once a new justice is confirmed.

This video includes clips from The White House, Facebook / Whole Woman's Health and University of Texas at Austin and images from Getty Images.