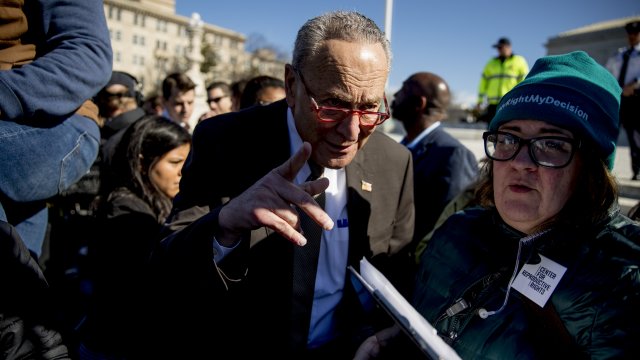 Senate Minority Leader Chuck Schumer is on the receiving end of some major criticism.

Chief Justice John Roberts called the senator out for remarks he made at a rally on the steps of the Supreme Court.

This, after the bench heard oral arguments on an abortion case from Louisiana Wednesday.

Schumer also said, "You won't know what hit you if you go forward with these awful decisions."

Roberts said Schumer's threatening statements were "not only inappropriate, but dangerous."

Schumer's spokesperson said the senator's comments were a warning that the justices' decision "will unleash a grassroots movement on the issue of reproductive rights against the decision."

But GOP senators didn't care for that warning, including Sen. Josh Hawley. He said he'd introduce a motion to censure Schumer. President Trump also criticized Schumer, even though he's previously directed a slew of comments toward justices himself — comments Justice Roberts also rebuked.

The case sparking these comments centers around a Louisiana law requiring doctors who perform abortions to have admitting rights at nearby hospitals. The court has not made a decision.