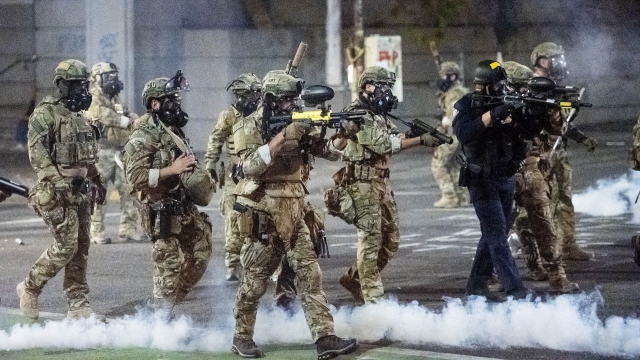 SMS
DOJ Watchdog Investigating Federal Agents' Actions In D.C., Portland
By Johannah Grenaway
By Johannah Grenaway
July 23, 2020
The agency will look at the training and instruction that was provided to DOJ law enforcement personnel, among other things.
SHOW TRANSCRIPT

The Department of Justice's watchdog agency is investigating the use of force by federal agents in Portland, Oregon, and Washington, D.C. Members of Congress, local officials and the public have alleged abuses of power by those agents.

Meanwhile, the Department of Homeland Security said it would investigate whether its officers improperly detained and transported protesters in Portland last week.

Violent protests in Portland have escalated in the weeks since the death of George Floyd. The president dispatched federal agents, who were reportedly unidentifiable on the ground. They were seen on video beating demonstrators. Mayor Ted Wheeler was reportedly tear-gassed by federal agents Thursday as he stood outside the city's courthouse.

The Justice Department is also investigating federal agents who responded to protests at Lafayette Square, near the White House, last month. Peaceful protesters were forcefully cleared by federal officers using tear gas ahead of a photo-op by President Trump in front of a nearby church.

The watchdog will look into the training and instruction provided to law enforcement personnel; agents' compliance with ID requirements, rules of engagement and legal authorities; and whether they followed DOJ policies on the use of force, chemical agents and "less lethal" munitions.

Meanwhile, President Trump says he's sending federal agents to other U.S. cities that have seen a rise in violence.