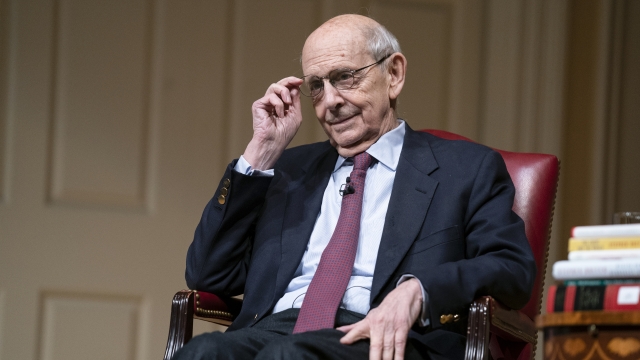 In the early 2000s, Justice Stephen Breyer spoke in front of The Supreme Court Historical Society about the importance of cases involving the Cherokee Nation in the 1830s. One of those cases was largely responsible for the Trail of Tears.

"United States shall guarantee to the Cherokee Nation all their lands, not hereby ceded the Constitution itself, may treaties supreme law of the land, and the Supreme Court made clear 20 years earlier that it would strike down state laws that violated Constitutional provisions," Justice Breyer said.

Justice Breyer took an interest in these cases to explain the limit of the Nation's highest court. Cherokee cases, for Justice Breyer, are an example of how the Court's ability to enforce American law was put to the test early in its history.

"I really appreciated that he brought up the Cherokee cases because those cases were part of a string of cases at the Supreme Court in the 1830s that could have started the Civil War," Matthew Fletcher said.

Fletcher is a law professor at Michigan State University College of Law and the director of the Indigenous Law and Policy Center. He says Justice Breyer's legacy and his history on Indian law cases is worth examining, as President Biden prepares to nominate a replacement for the associate justice in the coming weeks.

Fletcher says Justice Breyer was "no tribal sovereignty warrior à la [Sonia] Sotomayor, but he was no Indian fighter, either," meaning his record on voting in favor of Indian rights at the Nation's highest court was spotty.

"Bob Woodward wrote his book in the 1970s called 'The Brethren' about the backstories of Supreme Court cases in the 1970s," Fletcher said. "He asked questions like, 'What are the worst cases that you could possibly have?' You know, the ones that the justices hated the most. They said tax cases, and they said Indian cases."

One of the most controversial Indian law cases to come before the Supreme Court was Adoptive Couple vs. Baby Girl. It involved the Indian Child Welfare Act.

This time, Justice Breyer sided against tribal interests in the case.

Fletcher said the decision was an embarrassment to the court.

"They left out facts that are plainly relevant to the child's perspectives," Fletcher said. "They just got the law wrong and they wanted the non-Indian couple to win the case. And it was a 5-4 case, very hotly contested, and Justice Breyer voted for the White couple."

Since 2014, the Supreme Court has sided with tribal interests. Fletcher says it started with a case called United States vs. Lara, which asked the question: Does the Indian Civil Rights Act (1968) give Indian tribes the right to prosecute non-citizens?

"Breyer wrote an opinion that basically says yes, Congress has plenary power to ratchet up tribal powers to reaffirm tribal powers that have remained dormant, or that the Supreme Court has struck down, and that's a really important case," Fletcher said. "Maybe at the time, it was sort of a non important case, but if Congress is going to, for example, amend VAWA to allow for tribes to prosecute non Indians in certain contexts, which it partially already has, Lara is the foundational case for that ."

One of the biggest issues is that many law schools and those judges on the federal bench do not have an understanding of Indian law.

"Those faculties don't have any interest or care in Indian law," Fletcher said. "In fact, many of them are kind of afraid of it because they don't want to get it wrong. They also do want to learn it. "

Recently, there has been another shift on the Supreme Court with the appointment of Justice Neil Gorsuch, who wrote the opinion in McGirt vs. Oklahoma, and Justice Sonia Sotomayor, who by all accounts takes Indian law very seriously.

The question is whether President Biden’s nominee will have that background, too.