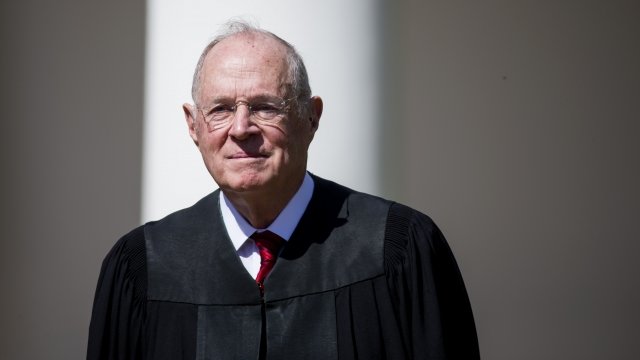 Justice Anthony Kennedy is almost 81 years old, and people think he might step down from the Supreme Court pretty soon.

The Supreme Court's current term ends next week and with that ending comes rumors that Justice Anthony Kennedy is planning to retire.

Those rumors aren't exactly new — they've been simmering for months. And Kennedy hasn't said what his plans are either way.

So, why all the speculation? Well, the most obvious answer is Kennedy's age. He'll be 81 in July.

But there's also the fact that Kennedy moved a reunion for his law clerks up from 2018 to this weekend. And several of those clerks think he's ready to step down.

Earlier this year, Republican Sens. Chuck Grassley and Ted Cruz said they expect another vacancy on the Supreme Court this year.

And if Kennedy waits another year, his replacement could face confirmation hearings during the 2018 midterms, almost ensuring politics would get involved in a system that's supposed to be outside of politics.

Male Supreme Court justices interrupt their female counterparts three times more than they interrupt one another, according to a new study.

If he does end up retiring, the Supreme Court might lose its swing vote. Kennedy is known as a conservative justice, but he's been very willing to vote with the more liberal justices on occasion.

Even though they technically have the job for life, most modern justices choose to retire at some point. Only four justices have died while sitting on the bench since 1950.

And if Kennedy is out, President Donald Trump gets to pick a new justice. At least one of Kennedy's former law clerks is rumored to be on Trump's list of replacements.