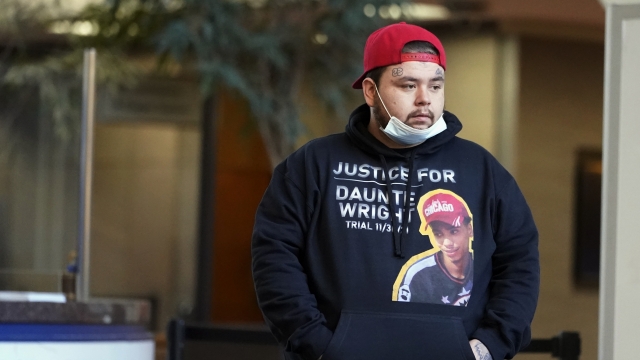 SMS
Mostly White Jury Seated For Trial In Daunte Wright's Death
By Associated Press
By Associated Press
December 3, 2021
Nine of the 12 jurors seated are White, with one juror identifying as Black and two as Asian. The two alternates are also White.

A mostly White jury was seated Friday for the trial of a White suburban Minneapolis police officer who said she drew her handgun by mistake when she fatally shot Black motorist Daunte Wright following a traffic stop.

Nine of the first 12 jurors seated for Kim Potter's trial are White — roughly in line with the demographics of surrounding Hennepin County, but notably less diverse than the jury that convicted former Minneapolis Officer Derek Chauvin this spring in the death of George Floyd.

Potter, 49, is charged with first- and second-degree manslaughter in the April 11 shooting in the suburb of Brooklyn Center. Opening statements are scheduled for Wednesday.

Legal experts have said juries that are diverse by race, gender and economic background are necessary to minimize bias in the legal system.

The Chauvin jury that was split 50-50 between Whites and people of color was "mostly just luck of the draw," said Ted Sampsell-Jones, a professor at Mitchell Hamline School of Law in St. Paul.

He said racial and ethnic diversity matters in terms of the perceived legitimacy of the jury, but attitudes about police and policing are much more important for the case outcome.

"It might be true in general that Black people are more distrustful of police than White people, but it isn't true as to every individual," Sampsell-Jones said. "Lots of young White people in Hennepin County are far more progressive and anti-cop than some older Black people, for example."

Alan Tuerkheimer, a Chicago-based jury consultant, said even a single juror of color can be enough to change the dynamics of deliberations by bringing more depth and another viewpoint to the process.

Potter has said she meant to use her Taser on Wright after he tried to drive away from officers while they were trying to arrest him, but that she grabbed her handgun instead. Her body camera recorded the shooting.

Of the first 12 jurors seated — the ones who will deliberate if no alternates are needed — one juror identifies as Black and two as Asian. The panel is evenly split between men and women. The two alternates are also White.

The jury roughly matches the demographics of Hennepin County, which is about 74% White.

Attorneys and the judge spent considerable time probing potential jurors for their views of protests against police brutality, which were frequent in Minneapolis even before George Floyd's death.

Questionnaires asked about attitudes toward police, including whether officers should be second-guessed, whether they get the respect they deserve and whether jurors personally trust them.

Juror No. 11, for example, said she "somewhat agreed" that officers should not be second-guessed.

"I think sometimes you just react, and sometimes it might be a wrong reaction, but, you know, mistakes happen," she said. "People make mistakes."

She was seated after saying she could set that view aside and consider evidence.

Several jurors strongly disagreed that it's unreasonable to question officers' actions. Juror No. 19, the only Black person on the jury, wondered how Potter could show such a "lapse in judgment" with her experience.

Potter, who resigned two days after Wright's death, has told the court she will testify. Body-camera video recorded the shooting, with Potter heard saying, "Taser, Taser, Taser" before she fired, followed by, "I grabbed the wrong (expletive) gun."

Wright, 20, was shot as Chauvin was standing trial 10 miles away for killing Floyd. Wright's death sparked several nights of intense protests in the suburb.

The most serious charge against Potter requires prosecutors to prove recklessness; the lesser only requires them to prove culpable negligence. Minnesota's sentencing guidelines call for a sentence of just over seven years on the first-degree manslaughter count and four years on the second-degree one. Prosecutors have said they would seek a longer sentence.