'Jurassic World' And Its Dino-Sized Inaccuracies 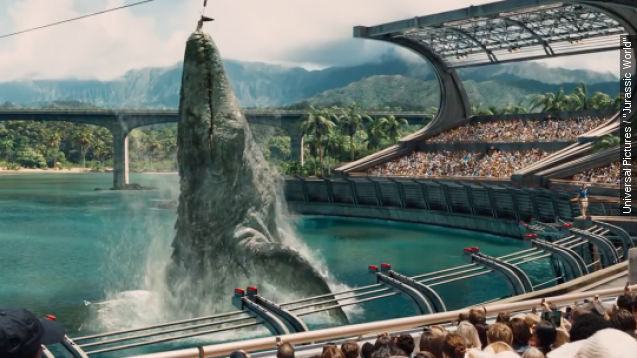 SMS
'Jurassic World' And Its Dino-Sized Inaccuracies
By Ben Lawson
By Ben Lawson
June 13, 2015
The "Jurassic Park" reboot has hit theaters and scientists can't stop talking about what the movie's creators got wrong.
SHOW TRANSCRIPT

You might have already heard this a time or two but sometimes Hollywood ignores science for spectacle and "Jurassic World" is no different. Scientists just can't decide whether that's a bad thing or not.

Since the trailer dropped, there have been all sorts of thinkpieces on the inaccuracies in the movie.

See that giant fish monster? That's called a Mosasaurus. However, scientists have written it shouldn't be that big, it shouldn't have that frill on it's back and it's not technically considered a dinosaur since it doesn't live on land. Those teeth, though. Those are real.

Also, scientists say the Velociraptors are scaled up as well. Those should only weigh about 75 pounds and be about the size of a medium-sized dog.

And another thing, paleontologist Kenneth Lacovara tells GQ that dinosaur brains are likely too simple to be trained the way Chris Pratt trains them in the movie.

"I would not try the Chris Pratt move there. The whole dinosaur whisperer thing is probably a good way to get yourself eaten," Lacovara said.

The inaccuracy that seems to be drawing the most frustration is the lack of feathers. Since the discover that birds are the descendants of dinosaurs, the scientific community agrees that the vast majority of dinosaurs had some kind of feathers somewhere on their body.

We can forgive 1993's "Jurassic Park." This theory didn't pop until after that movie was made.

A paleontologist writing for CNN is pretty irked by this detail calling it "a huge leap backwards and a bitter disappointment."

Jack Horner, the paleontologist that consulted with the film's producers, tried to explain the lack of feathers are about preserving the franchise's continuity.

"The 'Jurassic Park' movies are all one story ... With new discoveries, we just kind of have to shelve them if they conflict with the way they look," Horner told Metro.

Regardless, not all scientists are upset by the errors. A pair of paleontologists told The Washington Post that the movies made dinosaurs much more popular and put a lot more interest in that area of science.

Matthew Mossbrucker, director of the Morrison Natural History Museum, told the Post, "It's true that from what I've seen, the dinosaurs in 'Jurassic World' are not the most accurate. But these are opportunities to have people ask great questions and to educate them —  not excuses to throw popcorn at the screen."

This video includes images from Getty Images, Ballista / CC BY SA 3.0 and Matt Martyniuk / CC BY 2.5.