Juncker Suggests UK May Be Headed For Another Brexit Extension 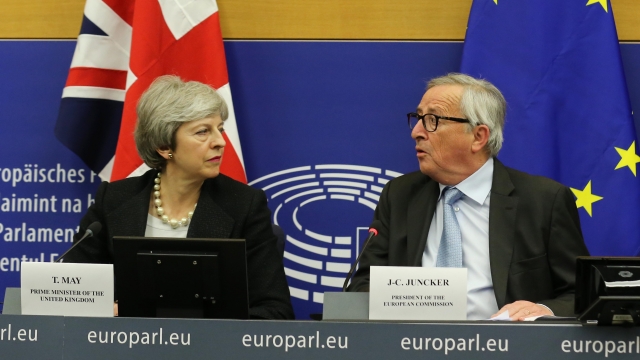 SMS
Juncker Suggests UK May Be Headed For Another Brexit Extension
By Ahmed Jawadi
By Ahmed Jawadi
May 23, 2019
Juncker said he wants to see the Brexit process finally come to an end, as the drama surrounding it was ​"harming the general atmosphere in Europe."
SHOW TRANSCRIPT

EU Commission President Jean-Claude Juncker has suggested there's a good possibility the U.K. won't be ready to leave the EU by its current October 31 deadline.

Speaking to CNN Wednesday, Juncker said he wants to see the Brexit process finally come to an end, as the drama surrounding it was "harming the general atmosphere in Europe." He also expressed frustration with the stalemate in Britain's parliament over the withdrawal agreement, and that he wouldn't be surprised if another request to delay Brexit was on the horizon.

Juncker also took issue with the recent calls by U.K. lawmakers for Theresa May to step down as the country's prime minister instead of focusing on coming to a consensus on the withdrawal agreement. He added that he "very much" likes May, and believes the best option was for U.K. lawmakers to support her Brexit deal.

The newest version of May's thrice-rejected Brexit deal has upset both opposition leaders and members of her own cabinet, for different reasons. While Labour party members found May's "new deal" as more the same as the original version, many Conservatives felt she went too far with some of her changes, especially with the possibility of the country holding a second referendum. When asked, Juncker said although he likes the idea of the U.K. holding another public vote, he's "not convinced that the result will be totally different."

As of now, Parliament is set to vote on May's deal sometime in June.