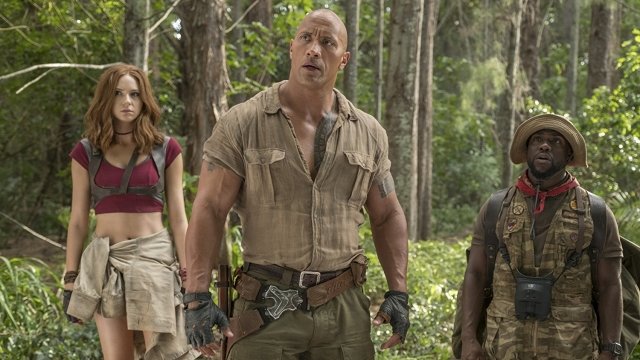 Four movies in, I think the "Insidious" folks are running out of ideas — I can't imagine the five-fingered key witch was "idea A."

But before we get to the DJ Khaled horror flick — taking the No. 1 spot for the first time since its release is "Jumanji," bringing in an estimated $36 million in its third week out. That pushes the action-comedy past half a billion worldwide — more than five times what Sony spent to produce the film.

"Jumanji" even managed to make its way into the top 10 highest-grossing films of 2017 by pushing past "Justice League" domestically. And with that, on to No. 2.

As long as there are creepy horror fans, there will be creepy horror movies — enter the fourth "Insidious" film, bringing in an estimated $29 million in its first week out. Despite this being the fourth film in the franchise, it's one of the best debuts.

Only "Insidious: Chapter 2" had a better opening, bringing in more than $40 million in its first three days.

As with most horror movies, these films don't cost a ton to make — over the course of the series, Blumhouse Productions has spent about $27 million but made more than $420 million.

And remember, just because this movie has "last" in the title somewhere doesn't mean it's the last film in the franchise.

Finally falling out of first place is "Star Wars: The Last Jedi," bringing in an estimated $23.5 million and slowing its world box-office domination after racking up $1.2 billion in a month.

As for next week, I don't know about you, but I'm starting think Proud Mary may have been better off at her good job in the city.