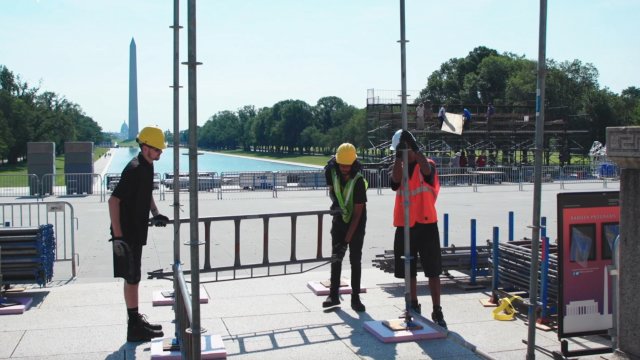 Story updated July 3, 2019, to include report about the National Park Service diverting $2.5 million in funding to help cover the cost of the Independence Day celebration.

President Trump’s expanded July 4th celebration along the National Mall, with military displays and flyovers, will use at least $2.5 million in National Park Service funds originally intended for upkeep and improvements at parks across the country, The Washington Post reported Tuesday night citing two people familiar with the arrangement.

The National Park Service and Department of Interior did not immediately respond to questions from Newsy about the report.

A Newsy investigation earlier this week found that the agency was already struggling to fund a long list of backlogged maintenance projects at sites across the country.

A diversion of $2.5 million would take away dollars that could otherwise go toward upkeep needs as well as habitat restoration, salaries and law enforcement, said John Garder, senior director for budget and appropriations at the National Parks Conservation Association.

"These dollars are being robbed to pay for one night of unnecessary expenses," Garder said.

Many of the projects on the list of unfunded maintenance needs will be within viewing distance of President Trump as he appears at the Lincoln Memorial for a speech billed as a “Salute to America."

The backlog includes about $4 million in uncompleted repairs at the Lincoln Memorial, $132,000 for an adjacent reflecting pool and $474,000 for landscaping on the memorial grounds.

The nearby Korean War and World War II memorials are also on the park service’s list of unfunded maintenance. The Jefferson Memorial, undergoing repairs to its dome, has additional renovation needs, park service documents show.

Some of the highest unfunded ticket items in Washington are the replacement of seawalls along East Potomac Park and the Tidal Basin, home to the city’s world-famous blossoming cherry trees.

Nationwide, the backlog is more than $11 billion, about three times the entire budget of the Park Service.

"That's a big price tag, so to get that from Congress is a big ask," said Marcia Argust, director of The Pew Charitable Trust’s Restore America’s Parks initiative. A National Park Service spokesman said the cost of this year’s July 4th program will increase this year but didn't provide an estimate.

Congress approved the agency’s budget long before plans came together for this year’s celebration.

"Any unexpected expense that is avoidable can definitely be a concern for such an underfunded agency," Garder said. "Park facilities are decaying and the park service has lost more than two thousand personnel, so [Interior] Secretary [David] Bernhardt needs to recognize that our parks need every dollar that they’ve been given.”

Private donations will fund added fireworks, and the Defense Department will pay for a flyover by the Blue Angels, according to the Interior Department. It said remaining costs will be paid for by other federal agencies.

When asked whether dollars would come from the deferred maintenance budget, a National Park Service spokesman said the agency has a variety of alternative funding sources it can tap.